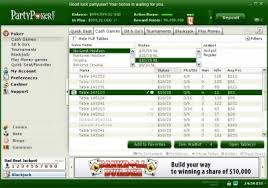 Partypoker has aimed to stop table hogging issues through a recently issued software update, along with miscellaneous improvements. (Image: partypoker.com)

Partypoker updated its software to stop table hogging at its poker tables and made a number of improvements to the lobby to improve the overall player experience. The popular poker site, which has seen its concurrency dip in recent months, took steps to address one of the biggest criticisms of its lobby, particularly the cluttered listings of tables that would only have one player sitting at them.

With this software update, partypoker aims to improve the player experience by reducing the clutter, in addition to other miscellaneous updates.

One of the major issues that partypoker hopes to resolve with this update is table hogging. This had become an issue for months on end and for those not familiar, is the practice of a player sitting at multiple cash games of the same game type and stakes by themselves. Players would simply sit alone and wait for action, ideally against players unfamiliar with heads-up play.

The result of players engaging in this practice was that players looking to join games would be forced to wade through an excess of tables at their preferred game and stakes level where only one player would be seated. It made finding a good game extremely painful for players.

Now, the update released last week should curtail that behavior altogether. Players sitting by themselves at more than one table of the same stakes and game type will only have one of those tables visible from the lobby. The rest of the tables that particular player is sitting at will be hidden from the lobby until that player sees another player sit down at the first table. This significantly cuts down on the “lobby clutter” that made finding active games so difficult.

The original intent of the “One Click Lobby” was to allow players to immediately find the game they are looking for, at the stakes they are comfortable playing at, within seconds. This particular lobby also received an update and was modified to only allow visible tables accessible, so players would be given an equal chance of joining any particular table. Specifically, this allows those sitting alone waiting to get action equal opportunity to have someone join them.

Those that enjoy playing tournaments will also see a new feature to assist them in finding better games. Those that aim to join a tournament during the late registration period can now see the exact starting chip amount they receive should they decide to enter the event. This provides players information they were lacking before so they can make a better decision on whether or not they want to enter the tournament.

On top of all those new features, partypoker has also included auto re-buy and auto add-on option for players that continue to use the old “classic” poker table theme. There is also an easier way of showing and hiding tournaments that are either running or completed, and a plethora of bug fixes were issued in the last patch.