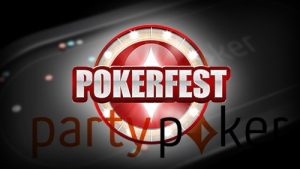 Pokerfest has been postponed until October 25th, with a $50,000 freeroll added as an apology. (Image: calvinayre.com)

Partypoker’s PokerFest has been postponed due to “performance issues,” according to the operator.

The 80-event tournament series, which was due to kick off on Sunday September 27th at partypoker.com, and offered $2.5 million in guaranteed prizes, will be postponed for one month.

Party said the festival will be rescheduled for Sunday, October 25th, with a revised list of events to be published shortly on the partypoker website.

The management blamed software updates that had been implemented during the week for the unforeseen disruption to services, complications that “are currently being resolved until they are rectified,” the site reassured.

Party will be laying on a $50,000 freeroll to compensate players for the inconvenience, while, all players who had paid their buy-ins have received an automatic refund.

“I apologise to our loyal players for having to delay this highly anticipated event,” said director of Games Labels for bwin.party Golan Shaked.

“With a total prize pool of $2,500,000 up for grabs, we are not willing to take even the slightest risk with our players’ experience during the 80 events that make up Pokerfest.

“We understand that the postponement is frustrating and disappointing to you, our loyal customers, but providing a service that gives you the best experience possible is our number one priority.”

Cyber Criminals on the Rise

While there’s no reason to disbelieve that partypoker is simply erring on the side of caution following the implementation of new software, the disruption of major online poker series is becoming an all too familiar event.

Many online poker sites are reluctant to publicly announce they have been victims of cyberattacks because they don’t want to admit their security has been breached.

Online poker companies face an increased risk of cyberattacks during their big tournament festivals, as it’s an optimal time for distributed denial of service (DDoS) attackers to flood the bandwidth of an internet site and render it temporarily nonoperational. Cyber criminals know they can achieve the most disruption during these events, and thus charge a higher ransom price.

The US-facing offshore market sites, meanwhile, are the most regularly disrupted, perhaps because they are unregulated and have little recourse to law enforcement.

888.com, which has been plagued by unspecified disruptions in recent months has introduced a unique “pause button,” which  can put a tournament on hold in the face of severe technical problems. Events can then be resumed when those issues are fixed, or written off for good.

But the pause button will still waste poker players’ time. Perhaps the best option is, if in doubt, to pull the event, as party has done here.

So how do they fight these DDoS attacks? As if it’s not difficult enough already for some of the sites to gain a foothold in the market, now they have this b.s. happening regularly 🙁