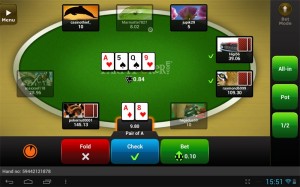 Many poker players have flocked to New Jersey to settle in and enjoy the state’s pro-gaming legal climate. The Garden State is home to some of the most well-populated legal poker sites in the United States, including several well-known worldwide entities. One of those companies – PartyPoker – has become the first legal online poker site in the United States to make a real-money native app available for Android smartphones and tablets. Currently, the Party-Borgata joint player pool is the largest in the state, with competitors WSOP.com and All American still lagging behind.

To participate in PartyPoker from your Android device, players must be inside the state boundaries of New Jersey and sign up for an account at PartyPoker’s New Jersey website. Once they have an account, players can then go to the same website from their Android smartphone or tablet. At this point, they will be presented the option to automatically download the native Android application.

For Apple players, all of the major poker room operators have already made iOS apps available from Apple’s App Store. This app, however, marks the first time a poker room has made an app available for Android users. Players should note that because of Google’s restrictions on all real-money gambling games, the app is not available from Google’s Play Store.

For those just looking to learn more, simply navigate to the New Jersey PartyPoker site, and click on the “mobile” button in the right-side navigation. There, players will see links to both the iOS App Store and a link to download the app for Android devices. There is also a FAQ on the page to answer player questions.

Google’s stance regarding any real-money application being made available for players is nothing more than an inconvenience to players. The behemoth corporation refuses to make any real-money app for poker or gambling available in the poker store. Nevertheless, Google has made the Android operating system open-ended so that users can install whatever they want to without being forced, like the Apple App Store, to download from the Play Store. Apple, on the other hand, will only allow real-money gaming apps to appear in the store wherever there is expressed legal precedent to do so, such as in New Jersey.

Borgata Poker, Others Not There Yet

The state’s largest rival to PartyPoker – Borgata Poker – shares the same player pool and software. This site, however, runs different promotions and an alternate VIP program. Currently, Borgata Poker does not offer an Android application, but they are found within the Apple App Store. Other rivals in the New Jersey space – such as WSOP.com and 888 New Jersey – both offer Android apps in other markets, but have yet to release one in New Jersey.

For those that have played overseas at PartyPoker from an Android device, the graphics, sounds, interface, and design will be very familiar. The application is purported to be the exact same one offered from the primary dot-com site, with minor changes to account for the New Jersey ownership of the player pool.