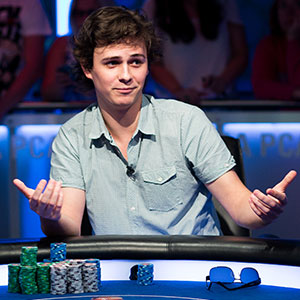 Dominik Panka of Poland won the PokerStars Caribbean Adventure Main Event and more than $1.4 million, defeating Mike McDonald, who was aiming to become the first player ever to win a second EPT title.

The Main Event of the PokerStars Caribbean Adventure is one of the most highly-anticipated live poker tournaments of each year. It takes place at the Atlantis Resort in the Bahamas as part of the European Poker Tour and Latin American Poker Tour, and the entire festival in 2014 boasted of 39 events. Ultimately, the $10,000 buy-in NLHE Main Event is the biggest draw, especially in its ten-year celebration with a $10 million guarantee.

The tournament drew a total of 1,031 players from 65 countries around the world, with a solid portion of that number drawn from the United States. Despite bad weather, America showed up, as did many other nations, and surpassed the guarantee for a $10,070,000 prize pool. The top 151 players were paid from the price pool money.

The first day of the tournament brought 295 players, including names like former NBA star Gilbert Arenas and actor Jason Alexander. The second starting day added 710 players, and even a few more entered before the start of Day 2. A total of 632 players, plus a new 12 names, began Day 2, but the field thinned greatly to leave only 215 players with chips. Pascal LeFrancois was the night’s chip leader with 412K, and Dominik Panka was in the top half of the field with 171,900 chips.

The third official day of action broke into the money portion of the event, and players like Ole Schemion, Leo Margets, Jason Mercier, Antonio Esfandiari, David Baker, and Greg Merson exited in the money. Play stopped with 76 contenders, Max Silver in the lead with 1,453,000 chips, and Panka in 21st place with 504K and off the radar of most reporters.

Day 4 saw the eliminations of players like Marcel Luske, Liv Boeree, Vanessa Selbst, Loni Harwood, and Jude Ainsworth. The field was reduced to only 20 players with Madis Muur leading them all with 3,515,000 chips, with Panka directly in the middle of the leaderboard with 1,474,000 chips.

The fifth day was the time to set the final table, and it started with the 20th place elimination of Roger Teska and ended with the ninth place finish of Max Silver, the latter of which was worth $135,400. With Madis Muur in the lead and Mike McDonald and Pascal LeFrancois close behind, the final table was set. Panka was in fourth chip position of the eight players.

McDonald made moves to begin the action, and though Daniel Gamez lost ground, he doubled through Muur and Lefrancois to move forward.

Panka stayed steady but then took a significant pot from McDonald to climb into third place. Then McDonald stepped in to eliminate Gamez, and Baron sent LeFrancois out in seventh place. Panka then climbed into second place on the leaderboard but fought with Muur for that spot, ultimately settling for third place by the dinner break and on a roller coaster ride after their return. Panks then eliminated Srinivasan in sixth place to climb in to the chip lead, though Baron soon took that spot and ran with it.

McDonald eliminated Gamez in fifth place, and it was Panka who stepped in to send Muur home in fourth. Panka had the chip lead when the final three players discussed a prize pool deal, and Panka agreed to take $1,323,096, the highest of the prizes, though $100K was set aside to be added to the winner’s money.

When play resumed, Panka took charge and took some chips from McDonald and Baron, climbing above 14 million chips. McDonald then took charge, however, but it was Panka who took the reins to eliminate Baron in third place.

Panka took the lead into heads-up play, though he and McDonald exchanged that position several times. Though Panka was losing ground, he eventually doubled through McDonald with pocket nines over K-J to acquire nearly 18 million chips. Panka kept going and garnered more than 24 million chips over the next few hands. It was soon after that McDonald pushed his last chips all-in with 7-4 against the A-2 of Panka, and the ace came on the river to give Panka the victory.

The Polish native won a $700 Mega Qualifier on PokerStars to earn the trip to the Bahamas, and he then transformed that into $1,423,096 in prize money, as well as a Slyde watch and a massive trophy.