Onward and Upward for Macau Gambling 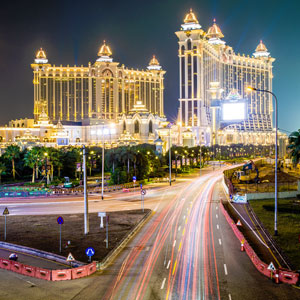 Macau casinos are continuing to set records for revenue with expectations even higher for the future.

The December numbers are in for the island of Macau and its casinos, per the Macau Gaming Inspection and Coordination Bureau. For the month of December, gamblers spent the equivalent of $4.2 billion. They acquired 360.7 billion patacas, which is equivalent to approximately $45.2 billion, in the entire year of 2013. That number set a new record for Macau which, according to the Associated Press, beat the recorded revenue of 2012 by 18.6 percent.

The six casino operators in Macau only expect to increase revenue going forward, as new projects are in the works from companies like Wynn Resorts and Las Vegas Sands. While casinos in locations such as Taiwan are also in the works, it will be hard for them to compete with the revenue that Macau continues to generate with its consistent growth.

Analysts have been quick to predict further increases in revenue for Macau. Some say that 2014 will see a nearly 20 percent growth again; one analyst at brokerage CLSA anticipates revenue of $77 billion by 2017. A writer for Barron’s concurs with a prediction of $70 billion by 2017.

Casino operators have also seen growth based on their Macau projects, as Wynn and Las Vegas Sands both saw their shares increase upon the release of the 2013 Macau numbers. While places like the Las Vegas Strip struggle with new casinos and simply maintaining revenues, Macau is constantly moving upward.

Hong Kong could add even more revenue for Macau by authorizing online gambling for casinos based in the island. And there are more than a few investors willing to get in on the action. According to Macau Business Daily, Japanese pachinko hall operator Dynam Japan Holdings hopes to work with a partner to produce online casino games per Macau’s regulations. The Gaming Inspection and Coordination Bureau would still need to amend its bylaws in order to authorize online gaming per se, as current regulations only mention the possibility of mobile gaming inside the casinos.

Dynam has already pledged to invest approximately $15 million in a Singapore online games company called I Got Games, Inc. to develop software for pachinko machines in Macau. That company’s CEO founded an online games business in China in 2005, and the partnership between IGG and Dynam would like to set itself up to be the first online gaming business in Macau.

Currently, Macau casinos are growing on their own, but the addition of online gambling could set them up to overtake the United States in terms of gambling revenue and leave Las Vegas in the dust. For the time being, that part of the ever-evolving market is in the hands of the Hong Kong regulators.