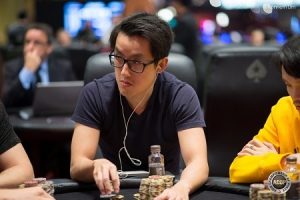 Mankind has triumphed against the machines in a two-week 80,000 hand no-limit hold’em battle Rivers Casino in Pittsburgh, but just barely.

In fact, the results were close enough to statistically be called a draw, according Dr Tuomas W. Sandholm of the University Professor of Computer Science at Carnegie Mellon University, whose team developed Claudico, a no-limit hold’em playing bot.

Humankind, represented here by Doug “WCGRider” Polk, Dong “Donger Kim” Kim, Bjorn Li and Jason Les, won nine of the 13 days of heads-up cash play against the computer, with a total difference of $732,713 in theoretical money.

The bot came fifth out of five, but the results suggest that artificial intelligence is becoming more adept at playing no-limit hold’em than we had previously imagined.

Another computer program, Cepheus, developed by the University of Alberta, claimed earlier this year to have “solved” the game of fixed-limit heads-up hold’em by playing literally trillions of hands of poker against itself, while learning and memorizing optimal moves as it goes.

But the no limit variant is a vastly more complex proposition for artificial intelligence to master. A recent study placed fixed-limit hold’em 14th in a list of strategy game complexity, while no limit was 140th.

Because poker, unlike, say, chess, is a game of imperfect information, game theory algorithms developed by computer scientists can never quite be truly perfect; instead they must approximate a “perfect” poker strategy, which is defined as a strategy that cannot be exploited by any other counter-strategy.

Despite failing to trump humanity, Sandholm said he was thrilled by the results. “We knew Claudico was the strongest computer poker program in the world, but we had no idea before this competition how it would fare against four Top 10 poker players,” he said.

“It would have been no shame for Claudico to lose to a set of such talented pros, so even pulling off a statistical tie with them is a tremendous achievement.”

A.I. Will Catch Up With Us

“Beating humans isn’t really our goal; it’s just a milestone along the way,” Sandholm continued. “What we want to do is create an artificial intelligence that can help humans negotiate or make decisions in situations where they can’t know all of the facts.”

Sandholm believes the algorithms involved could have future applications in business, military, cybersecurity and medical arenas.

“We know theoretically that artificial intelligence is going to overtake us one day,” said Li. “But at the end of the day, the most important thing is that the humans remain on top for now.”

I’m pretty sure some of the developers at Deepmind, a new Google acquisition based in London, has algorithms that beat most players at NL Hold’em. It was explained to me thus- AI should always play optimally- and (most) humans will not. However it is flawed, in as much as it will monitor your style of play, and as long as you don’t change your style, you will be beaten. The trick is to vary your play- the suggestion given to me was to have favourite hands based on suits- that way you will play what the computer sees as equivalent hands differently. e.g. if you decide to bias spades, you will play 9s10s more often than , say, 9d10d, and so adding natural (unreadable) variation to your play.