Online Poker Sites Make the Move Towards Recreational Players in 2016

Once upon a time, online poker sites catered almost exclusively to grinders and pros. But in 2016, all that began to shift, as the ongoing loss of recreational players on sites forced operators to make some significant changes to how they did business. 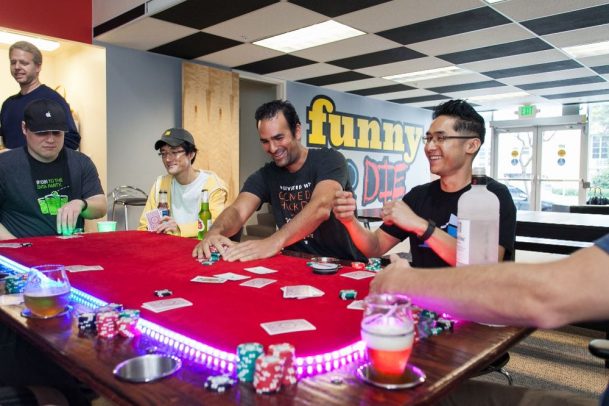 As both online poker and brick-and-mortar rooms vied for more recreational players in 2016, changes to VIP programs and tournament buyins and structures resulted. And it seems to be working. (Image: glassdoor.com)

While that might have seemed somewhat counterintuitive, it in fact proved to be the “new normal” in the online poker universe. Which begs the question: why would any poker site want to cater to those who don’t play as often as the regulars?

It’s a simple one-word answer:  volume and, of course, revenue. More online poker players, even those playing at lower stakes, are better for the long-term bottom line. The reason for that is pretty simple to understand, in that neophyte players are more likely to make mistakes and lose their bankroll, thus re-depositing rather than withdrawing, and probably doing many rinse-and-repeats.

Pros, on the other hand, are more likely to hit and run with their money. From an operational standpoint, losing customers are simply a better bet than winning ones.

Getting Back to Basics

Ever since the online poker crash in 2011, the number of casual poker players has continued to decline. A perfect storm of fewer legal sites, more highly experienced sharks, and less variance for the latter group has chased away newbies and casual players. And without the recreational player, the grinders and pros are simply cannibalizing each other, and what fun is that?

To counter that trend, several major internet poker sites made changes in 2016 to attract more recreational players. For example, PokerStars scrapped its Supernova Elite rewards program for its highest rollers, in favor of a system which benefits recreational players more.

And while the PokerStars VIP changes haven’t gone over well with the pros, the site is confident it was the right move overall.

Not Just an Online Shift

For many years, brick-and-mortar casino poker rooms have offered bad beat jackpots. These are geared towards the recreational players. Those who play this game for a living understand that chasing a bad beat jackpot is a sucker bet, but the casual players enjoy the chance to win big.

In 2016, a super high roller tournament was created just for the casual players. Previously the $1 million buy-in tournament at the World Series of Poker, the Big One for One Drop was open to non-pros only this past year. The event was held this past October in Monte Carlo.

PokerStars wasn’t the only poker site catering to its amateur customers in 2016. 888poker made similar changes to its rewards program. But after learning from PokerStars’ mistakes, 888poker continued to honor existing rewards.

The new program, 888 PokerClub, dropped the site’s status levels in favor of a challenge system where players earn gold tokens towards rewards.

TonyBet is another site chasing the casual poker audience. This year, the poker site changed its rakeback system to keep amateurs in the game long-term.

To help a not-so-talented player not lose hope, TonyBet now pays back 80 percent of the rake each player paid to those who lose more than €100 in cash games in a day. And for those who only lost €100 or less, up to a €100 profit in a day, a 50 percent rakeback bonus is paid.

noticed the article doesn’t mention any sites that us USA players can play…. Would like to know if those sites are also leaning to us recreational players.