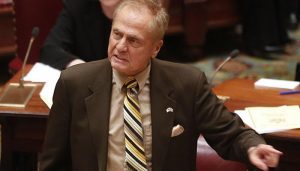 The New York State Senate has included online poker regulation in the first draft of its budget plan. The news was broken Monday by the Poker Players Alliance, and the player advocacy group is asking New York residents to contact lawmakers to ensure that regulation of online poker stays in the budget plan.

“Part FFF” of the plan (S6409B) states: “The Senate advances language to authorize and regulate On-Line Poker.” The language in question apparently that of Senator John Bonacic’s (R-47th) S5302B, whose separate bill to regulate daily fantasy sports is also included in the existing budget draft.

Bonacic’s poker-only bill was introduced last year but failed to make any headway; instead playing second fiddle to the state’s land-based casino expansion efforts, as a cluster of casino gaming licenses were awarded to new casino projects upstate.

But in February, the state Senate Racing, Gaming and Wagering Committee passed the bill by a 9-0 margin, taking just five minutes to reach its decision. It marked the first time a New York online poker bill had made any significant progress through the state legislature.

S5302B was then passed to the Senate Finance Committee with, no news of any progress since until it turned up this week, auspiciously included in the budget.

The bill proposes to create ten licenses in total, with a $10 million licensing fee and a 15 percent tax on gross gaming revenue. Licenses would be valid for a decade.

A study commissioned in 2014 by MGM Resorts suggested that New York residents could be spending as much as $110 million a year on the offshore online poker market. With a population of 19.75 million, far greater than any of the regulated states, online poker could boost state coffers to the tune of $50 million to $161 million, depending on who you believe.

It’s clear that the regulation has support in the legislature but whether it has enough to keep it on a final, rubber-stamped budget proposal is a tough call. It’s possible that some supporters of regulation would rather wait until the state’s new casino licensees are up and running before making a move.

The budget has a deadline of March 31st, in preparation for the beginning of the new tax year, and as it exists today it is still very much a blueprint and must be agreed to by both houses before it is passed. With that deadline looming, and presuming it is met, we will know the fate of online poker regulation within a matter of weeks.