Online poker mergers were all the rage in 2016, as the online gambling industry in Europe continued to experience high levels of consolidation. Gaming operators sought to save costs and achieve greater scale in order to weather increased regulation and taxation. 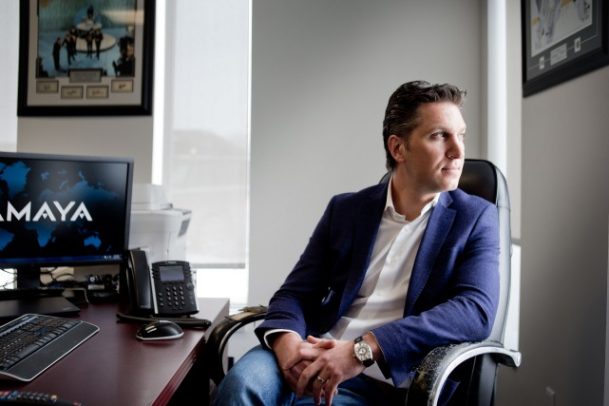 Amaya’s David Baazov, who has since resigned, made a bid to take the company private that was disrupted by insider trading charges. Then Amaya was shot down later in the year for a merger opportunity by William Hill by the latter’s shareholders. (Image: Marco Campanozzi/Archives La Presse)

One of the most eye-catching mergers of the year was GVC’s acquisition of bwin.party, following a protracted bidding war with 888 Holdings that raged throughout 2015.

The $1.6 billion takeover was completed on February 1, and shares in the newly enlarged company began trading on the London stock exchange the very next day.

From a poker point of view, the combination immediately raised questions over Party Poker’s relationship with Borgata in New Jersey, where they were, in their partnership, online poker market leaders.

GVC did not possess a New Jersey license, but immediately applied for one and was granted a temporary permit. With that, the company could continue offering online poker through Party Poker under the Borgata banner, provided GVC took a back seat from “operational or management control or influence” until its full license was rubber-stamped.

But eyebrows were raised when GVC announced it would be returning Party Poker to 21 gray markets around the world, a move that may have put its license at risk. These were markets bwin.party had withdrawn Party from back in 2013, probably to curry favor with the New Jersey regulator as it sought a license just after the state opted to legalize online poker.

The implication was that GVC didn’t particularly care whether it received a full license in New Jersey or not. After all, it had bigger fish to fry and reports claimed its relationship with the Borgata had broken down.

But the New Jersey Division of Gaming Enforcement ultimately concluded that GVC was the just the “right” shade of gray for its tastes and the partnership was salvaged. Meanwhile, under GVC’s stewardship, Party Poker, which had become little more than a loss-leader for bwin.party, returned to growth for the first time in five years.

Other mergers included the combination of Betfair and Paddy Power, and Ladbrokes and Gala-Coral.

But one of the most curious courtships of the year was the dalliance between PokerStars parent Amaya and bookmaker William Hill.

Amaya had begun the year with the bombshell news that its dynamic chairman and CEO, David Baazov, was preparing a bid for the company himself, as he moved to take it private. But in March, Baazov made even bigger news when he was charged with five counts of insider trading, ultimately leading to his resignation.

William Hill, meanwhile, had been desperately searching for a merger of its own. In early 2015, its attempt to acquire 888 was ultimately rebuffed, and in 2016, it suffered the indignity of fending off a takeover attempt from its former target 888, in combination with the Rank Group.

In October, William Hill and Amaya announced a $6 billion “merger of equals” that sought to create a transatlantic gambling powerhouse and a “clear international leader across online sports betting, poker and casino.”

But William Hill’s shareholders clearly believe that some people are just more equal than others, and rebelled. Its biggest, Parvus, wrote an open letter to the board, decrying the proposal as a “waste of time” and a “value-destroying deal.” A wounded Amaya was forced to defend itself from an onslaught that described it as an “overvalued asset,” which would be bought in an “undervalued currency.”

As we enter 2017, the landscape will continue to shift. And all eyes will surely be on William Hill, whose need is great, but whose options are narrowing.