Online Poker Laws in Switzerland to Be Revamped Under New Proposals 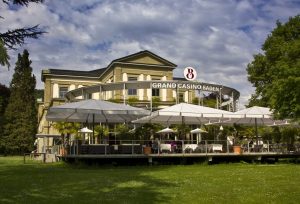 Online poker players could ditch the big casinos like Baden and take to their laptops after the draft gambling bill is passed. (Photo: Grand Casino Baden)

Online poker players in Switzerland could soon have new legal sites to play at.

Draft proposals for new gambling legislation are being drawn up in a reversal of previous gambling bans.

And the country’s 21 land-based casinos could be set to benefit.

The revamped draft bill will cover most forms of online gambling, a dramatic reverse of current Swiss law.

Under existing legislation, no online gaming is permitted at all.

However, if a new regulatory body is formed both Swiss and overseas firms will be able to register for an operating license.

Also permitted will be home and private poker games.

Private poker tournaments outside casinos were banned in 2010 after a Swiss court ruled Texas Hold’em was a game of chance.

Angered at so much gambling revenue leaving the country to unlicensed offshore sites, Switzerland is making its move.

And the country already has a favorable tax regime set up for overseas operators to flourish. Swiss workers and residents currently enjoy favorable income tax rates.

As part of the new proposals, Switzerland would dump tax on winnings made from poker and gambling. Currently, sportsbooks, lotteries and casinos have to pay tax.

As with the monopolized lotteries, some taxes from legalized gambling will be set aside for “charitable purposes” and “social projects”.

A Century of Prohibition

“Games of chance” were only legalized in Switzerland in 2000, following a hundred years or so of prohibition. The casino industry in the country boomed as Swiss nationals rushed to the new wave of casino chains.

Switzerland once boasted Europe’s largest casino, the , in the Ticino enclave. And with three casinos within a 2,800-square meter area, it had the largest concentration of casinos in mainland Europe.

However, casinos’ fortunes have since dipped due to the country’s total ban on online gambling. As part of the prohibition, advertising and marketing online games in Switzerland is banned.

Operating servers within the country and processing financial transactions are also prohibited.

Liquidity Could Be Key

In 2013, the Swiss Federal Council presented a first draft of new laws to free up the country’s restrictive laws. But the draft only accounted for a tiny number of licenses to be issued.

The Swiss Casino Association, which one would have expected to have been delighted with the proposals, is against the draft law.

Representatives object to non-land casino operators being given licenses.

This mirrors the concerns of US cardrooms and casinos in the new regulated landscape.

Whether Switzerland will demand that online sites ‘buddy up’ with existing offline operators to obtain a license isn’t known yet. Currently, major overseas sites already offer games to Swiss residents, with no IP-blocking measures in place.

Where Switzerland will have to be mindful is in allowing its residents to play against overseas players. By all accounts it looks as though there will be no ‘ringfenced’ player pools as in Italy and France.

Italy is struggling right now with its .it poker sites. Major poker operators in Switzerland will not want to fall into the same trap.