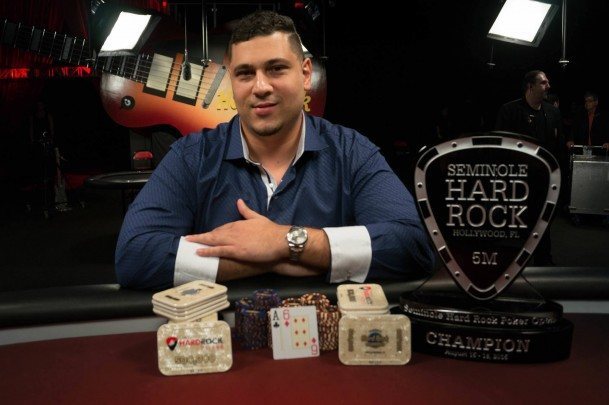 The 2015 Seminole Hard Rock Poker Open once again failed to hit its guarantee, coming up about 100 entries short of what was needed to build the prize pool to $5 million without forcing the casino to kick in some of its own money.

But that didn’t stop the final table from providing plenty of story lines while crowning a new poker millionaire.

Omar Zazay of Richardson, Texas scored the biggest win of his poker career, earning $1 million by taking down the Seminole Hard Rock Poker Open (SHRPO) Championship. Zazay overcame a field of 907 players and a final table that included the possibility of a repeat winner in order to win his first major poker championship.

After last year’s SHRPO Championship came up about $2.5 million short of its guarantee, the tournament format was changed this year in an attempt to make sure history wouldn’t repeat itself. The guarantee was cut in half to $5 million, and players were limited to a single $5,250 entry.

Those changes made things closer this time around, though the field still came up a little short, leaving about $250,000 in overlay for players.

Last year, the biggest beneficiary of that overlay was Daniel Colman, who won the tournament as part of a year in which he seemed to find victories in every big event he played in. For a while, Colman looked as though he might repeat that performance, as he once again reached the SHRPO Championship final table this year.

But it was not to be. Though Colman made a deep run, his tournament ended in third place, earning him $310,000 in prize money.

“Getting down to three-handed with Dan Colman was definitely a sticky situation,” Zazay said after his victory. “I had him on my right so I had a little edge on him. I was trying to do the best I could against him and not give him chips so he could use them against me.”

After Colman was eliminated, that left Zazay and Brian Phillis in a heads-up battle. The two fought for more than 100 hands before Zazay was finally able to finish his opponent off, as his A6 stayed ahead of Phillis’ A5 on the last hand of play.

“The heads-up was a lot going on. I know I really wanted this title so I tried my best to win,” Zazay said. “I just took it one hand at a time and slowly edged my way to the win.”

The championship event was just one of four final tables held simultaneously. The “Big 4” provided plenty of drama on Tuesday night, including one big-name winner in the highest buy-in tournament of the series.

That was Jason Mercier, who won the $25,400 buy-in High Roller event. The re-entry tournament featured a guarantee of $1 million, but more than doubled that as 83 total entries were received for the event.

Mercier ultimately triumphed over a table that included names such as Phil Laak and David Sands, winning $652,800 for his efforts.

“It definitely never gets old winning,” Mercier said after the tournament. “Anytime you can win a poker tournament it feels good and I’m just glad I won this one.”

congrats to Jason Mercier, winner of the high roller event ! a class act every time .