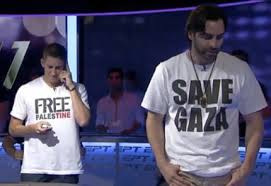 Poker pro Olivier Busquet has responded to the maelstrom of contention caused by his and Daniel Colman’s decision to wear T-shirts emblazoned with the slogans “Free Palestine” and “Save Gaza” at the EPT Super High Roller Event in Barcelona last week. The T-shirts sparked an extensive debate regarding appropriate behavior at the poker table and freedom of political expression, and prompted some harsh words from tournament sponsor PokerStars.

“In retrospect it was a mistake to allow them entry,” said Eric Hollreiser, head of corporate communications for the Rational Group. “Our tournaments are designed to promote poker and poker competition and not as a platform for political statements. Players have many channels to express their views on world politics, but our tournaments are not an appropriate place. We will refuse entry to any player displaying political statements of any kind.”

“Are we cool with PokerStars making this profit-based decision at our expense?” countered Busquet. The 23-year-old New Yorker admitted in an interview with Thinking Poker that he was, in fact, quite sketchy on the issue of Palestine, but he wore the shirt as a gesture of solidarity towards his friend Colman, joking that he usually lets his wife choose his outfits for final table appearances.

“This issue would not have been at the top of my list… I’m not an expert on this issue,” he said. “But it’s an issue that I think is important … and it’s an issue I do care about.”

Busquet, who was the first player to earn $2 million playing heads-up sit-n-gos, said that initially he said “no,” but was persuaded, and then realized that it was important to “show compassion and solidarity with a place, [and] that no matter what you think about the situation, has clearly suffered a lot.”

No Politics in Poker?

The pair also wanted to whip up some political controversy in the poker world, which can be famously apathetic about issues beyond the felt.

“There was a specific attempt to inject some politics into the poker world,” he said. “It’s worth having the conversation about whether it’s appropriate or not.”

Many balked at the attempt to politicize poker, however, most notably Card Player Lifestyles’ Robbie Strazynski, who countered that “there’s no room for politics in poker.” Others were supportive, like Nolan Dalla, who said: “There was nothing profane nor vulgar about either item of clothing. Frankly, the T-shirts would hardly even be noticed on the streets of any cosmopolitan city.”

However, most players, said Busquet, were neither condemnatory nor supportive. “The poker community is cool about that because the poker community doesn’t care too much about politics… and that’s part of the problem,” he said.