Olivier Busquet and JC Alvarado will throw down for a combined purse of $270,000 on April 21 in the fight capital of the world, Las Vegas. 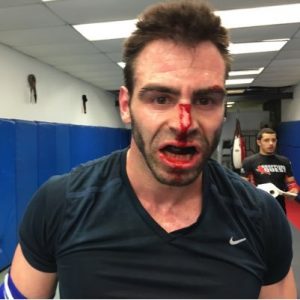 Olivier Busquet and JC Alvarado will fight for $270,000 on April 21 in Las Vegas. (Image: Twitter/@olivierbusquet)

The fight, which will take place under the rules of mixed martial arts (MMA) commonly used by organizations such as the UFC, was first announced back in October 2015 after Busquet appealed for a challenger.

Having taken up the sport as a way to improve his fitness and indulge his competitive urges, Busquet threw out the challenge on Twitter and received a flurry of suggestions.

Terrance Chan, the poker pro who has since turned into an MMA pro was one of the top names on the list of suggestions. However, with Chan boasting a record of 6 and 0, it was felt that his experience would be a little too much for the novice Busquet.

Another name that made it into the mix was JC Alvarado. Already known for his love of MMA, Alvarado agreed to fight Busquet and almost immediately the negotiations began.

A short while later the details were announced on Twitter with Alvarado stating that he’d be putting up $150,000 to Busquet’s $120,000 in catch weight fight.

Owing to their natural size difference, Busquet will weigh in at 187.5 pounds while the naturally smaller Alvarado will step into the octagon at 165 pounds.

As is common with these types of events (i.e. in the past when Bertrand Grospellier fought Lex Veldhuis in a boxing match back in 2011), the side bets started almost as soon as the fight was announced.

English pro Max Silver was the first one to throw his support behind Alvarado by stating that he’s willing to bet up to $2,500 against anyone who wants to back Busquet.

This is No April Fool’s Joke

Since that flurry of action the two fighters have been relatively quiet, only offering brief insights into their training via Instagram and Twitter. However, earlier this week Busquet tweeted that the bout will take place on April 21 inside Syndicate MMA’s gym in Las Vegas.

Scheduled to go down at 6pm local time, there will be a live stream of the event as confirmed by Alvarado and it’s likely tickets will also be on sale for those who want to watch cage side.

Soon after the date of the fight was confirmed, Alvarado posted a picture with his current training partner, Demetrious Johnson. The UFC’s flyweight champion has been offering the poker player a few words of advice over the last few months and even discussed Alvarado’s training on Joe Rogan’s podcast.

“I was doing my thing and I hit him in the liver. At that point, I started hitting him in the face. I’m very nice and I promise all my sparring partners that I’d never hurt them,” Johnson told Rogan.

Whether or not a few rounds of punishment from one of the best pound-for-pound fighters in the world will help Alvarado on April 21 remains to be seen.

However, we’re sure that a large number of poker fans will be tuning in to see how things go down in the latest pro-on-pro prop bet.