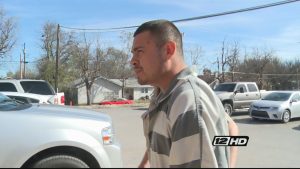 An Oklahoma man shot dead was allegedly the victim of a dispute stemming from a home poker game at his house.

A Sulphur, Oklahoma man shot dead on Saturday night was allegedly killed due to a dispute stemming from a home poker game.

23-year old Robert Carmona and 29-year old Victor Perez were watching boxing and playing poker at Perez’s house when an argument over the poker game broke out.

According to police, Perez and Carmona brought the fight outside and began wrestling. Carmona then pulled out a .22 caliber pistol and fired two to three shots at Perez. One shot struck Perez in the neck and entered his spine.

Perez was found dead at the scene and is believed to have died instantly.

Police have not released details about the incident, nor have they indicated what caused the dispute. There appears to be numerous witnesses.

The incident occurred in a residential neighborhood of this small southern Oklahoma town. Children were seen playing in the streets close by when police arrived at the scene.

Following the shooting, Carmona took off running to nearby Artesian Casino, hoping to find a ride to Texas.

By this time, word had spread about the incident and Carmona’s description was provided to local authorities.

When a police officer at the casino spotted Carmona, he was taken into custody and arrested on first-degree murder charges. His life as a fugitive was short lived.

Carmona made his first court appearance on Monday. He apologized for what he had done.

An apology won’t be enough to bring back Perez nor will it prevent him from likely spending the rest of his life behind bars.

According to residents, the neighborhood is a safe place to live. Well, it was before Saturday night.

Aimee Williams lives just a few houses from where the shooting occurred. She told KXII, a local CBS affiliate, that her view on the area has changed.

“It just felt really safe up until the other night,” Williams said. “I never expected it to happen in the first place so now you are always concerned is this type of thing going to happen again.”

Another neighbor, Robyn Velarde, couldn’t believe such a heinous crime could happen in a small town like Sulphur.

“It’s very heart wrenching to think that what if my kids were at home by themselves and this were to happen. What would they have done,” Velarde said. “I feel for the parents of the victim and the family of the victim. And I just think it is a horrible thing that happened and we will be praying for all involved.”

It is unclear what specifically sparked the dispute. Perez and Carmona were co-workers that got together with a group of people to watch boxing and play poker.

Whether or not the argument was fueled by a bad beat at the poker table or otherwise, remains to be seen. That information will likely be available in the coming days. For now, an innocent man is dead and a 23-year old ruined his own life, all because of a petty dispute.

Once again we see a murder only because a gun was nearby when someone lost it. He wouldn’t be dead right now if guns weren’t so easy to obtain.

He would have been stabbed to death instead.