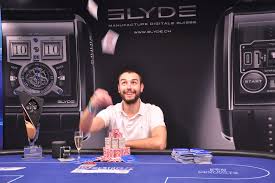 Although Ognyan Dimov is only the second Bulgarian to win a European Poker Tour main event title, his heads-up opponent, Dany Parlafes, would have been the first from Romania.

Parlafes began the EPT €5,300 ($6,000) Deauville Main Event final table as the big stack and dwindled six down to two, but after 117 hands of one-on-one action, Dimov was the last standing of the 592 players who entered the event.

Fellow countrymen Dimitar Danchev, Bulgaria’s other EPT titleholder, and Simeon Naydenov, a WSOP bracelet winner, were both felt side cheering on Dimov. “It’s so exciting,” Dimov said after the win. “I am really happy, and have been waiting for this moment for a long time. I just want to go and party and enjoy the victory.”

Traditionally one of the weaker events on the EPT, the final table began on Day 6 and players wasted no time in getting the action rolling.

On the very first hand, the always-colorful Joseph Carlino went all-in with A-K, only to be eliminated by Andrius Bielskis. A short 16 hands later, Bielskis went out after unfortunately calling Benjamin Buhr’s pocket aces with his own A-3.

The main attraction at the final table was Benjamin Pollak, the highest-ranked Frenchman on the Global Poker Index.

The 11th-place finisher at the 2015 PokerStars Caribbean Adventure Main Event had another impressive showing, cashing out in fourth with over $212,000 after being ousted by Parlafes’ ace straight.

Buhr would be next to exit exactly 20 hands following Pollak. His elimination paired Dimov and Parlafes in heads-up play, with the championship and over $600,000 on the line.

When the final table began, Parlafes and Dimov were the chip leaders. The two big stacks tapered the competition rather swiftly, but it would conclude with long-fought marathon duel.

As they entered heads-up play, Parlafes remained the big stack at a 2-1 advantage, but Dimov would manage to turn the table. Roughly midway through heads-up play, Dimov surged into the chip lead after a series of small wins and would never look back.

Following a Q (hearts), 6 (hearts), 3 (clubs) flop, Parlafes’ fate was sealed when the 3 (hearts) landed on the turn. Although he wouldn’t be bringing his country an EPT title, he did secure a hefty payout of $383,974 for his efforts.

The 12th largest country in Europe, when it comes to poker, Romania hasn’t found much luck.

Parlafes’ $383k takes his live career earnings to $870,183, good for fourth on the Romania all-time money list. His near miss at an EPT main event title wasn’t the first for the country. Other close calls include:

it would be good for the game to have a few more poker celebrities from some smaller European nations . the game seems to be stagnating here in the US .