The 2016 WCOOP, PokerStars’ World Championship of Online Poker, is back.

This year, there will be some interesting alterations to the schedule. In what’s become something of a tradition at PokerStars, the 2016 WCOOP will feature more events (82), but that’s not the only change to the schedule this time around. 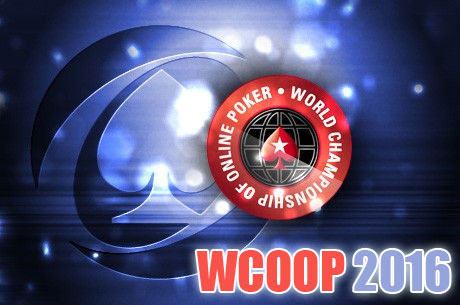 The 2016 WCOOP will not only offer more ways to win, but a unique twist to the format of some events. (Image: pokerstars.com)

Following a series of meetings and revisions, the final schedule was announced this week and there’s some good and bad news, depending on your point of view.

This time around, the online tournament festival will take place between September 4 and September 26, but unlike previous years, event winners won’t get a shiny trinket. Instead, you will be shown more money for scooping an event.

Since its inception, WCOOP winners have received a bracelet for their efforts. But, owing to a general lack of support for the idea, PokerStars has decided to scrap it this year.

Although winners will still receive a token item if they win a tournament, PokerStars’ Bryan Slick confirmed that the money usually spent on bracelets can now be used elsewhere.

One area which will benefit from the lack of spending on bracelets is the Player of the Series leaderboard. Anyone that makes enough cashes and accrues enough points will win a share of a $70,000 prize pool, as well as a shot at live and online tournament packages.

Beyond these adjustments, one of the most interesting developments to this year’s WCOOP are the player’s choice events. Marked at #48 and #50 on the official roster, the tournaments will each cost $215 to play, but the formats are, as yet, undecided.

The idea behind this initiative is to give players who vote a chance to compete in an event that they deem to be of “value.”

Following an initial round of player submissions, PokerStars will tally the most popular format suggestions and put them into “voting booths.” Players can then choose to buy into a voting booth (maximum one per event) for $215, which essentially registers their vote for it.

After a week of voting, the events with the most registered players will be officially added to the schedule as events #48 and #50, while the other voting booths will be removed from the site, and all players who voted for those events will be refunded.

The kingpin of the 2016 WCOOP will be, unsurprisingly, the $5,000 Main Event. Kicking off on September 25 and boasting a $10 million guarantee, this year’s Main Event won’t carry a $200 registration fee as it did in 2015, and players will be allowed a maximum of one reentry.

Those tweaks to the format could help push the number of entrants beyond last year’s total of 1,995, and help raise the WCOOP’s bar once again.

The entire event schedule is available on the PokerStars site.