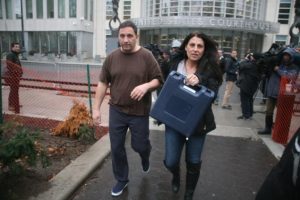 The 19-year law enforcement veteran was part of a 13-strong gang busted by his former NYPD colleagues following a tipoff about a longstanding underground poker game in Staten Island.

Known to local players as 5th Street, the unlicensed poker game reportedly served alcohol and food alongside its poker games and took thousands of dollars in rake every night.

According to state laws, home games in New York are legal if no rake is taken by the house; however, the moment money is taken from the pot or tournament buy-in, the game is deemed illegal.

This was the case at 5th Street and the reason NYPD officers began an internal investigation into the game in 2011.

Following years of investigations and suspicion that the game was being operated by a member of the force, the NYPD eventually swooped in on the game and arrested 13 players, including Palase, retired NYPD sergeant Ralph Mastrantonio and fireman, Michael Bergen.

A series of trials ensued at the start of 2015 and both Palase and Mastrantonio were convicted in February and April, respectively.

As well as having to fight charges that he was running an illegal poker game, Palase was also accused of threatening to kill Bergen (who had his charges dropped).

“Palase shouted ‘you’re dead,’ and made obscene hand gestures toward Bergen, including making a hand gesture of cutting his head off,” read the police report.

This accusation resulted in Palase having his bail revoked; however, this was later reinstated after Palase’s defense team suggested that he was simply rubbing his neck and not making an obscene gesture towards Bergen.

After fending off these allegations, Palase faced charges of operating an illegal poker game which prosecutors believed should carry a prison sentence of between 15 and 21 months.

According to reports, Palase’s strategy was to admit he made a “grave mistake” during a teary-eyed testimonial and cut a plea bargain with the judge.

“He has already lost more than I believe any other defendant. He lost his job that he had for 19 years that he cherished and he excelled at,” stated Palase’s lawyer, Joyce C. London.

Admitting his crime and essentially sacrificing his career with the NYPD, Palase was eventually spared a prison sentence but was slapped with three years of probation and home confinement for eight months.

Additionally, the disgraced former detective was ordered to complete 200 hours of community service and he lost all rights to the pension he’d paid into for 19 years.