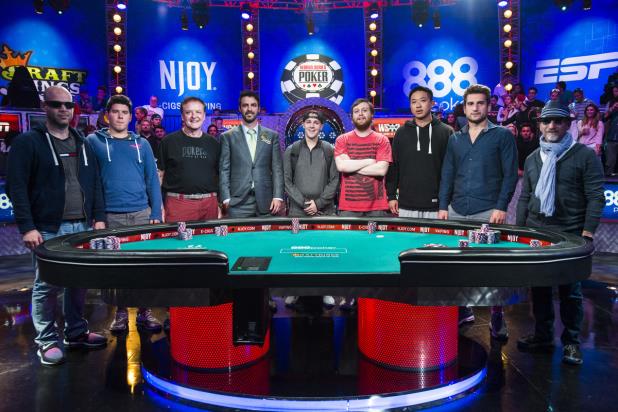 November Niners will get their cards in the air when the 2015 WSOP Main Event final table kicks off, almost live on ESPN, November 8th from the Rio in Las Vegas. (Image: WSOP.com)

The long wait for the November Nine to whittle down to one is nigh upon us. Beginning November 8th at 8:30 pm ET/5:30 pm PT, the 2015 WSOP Main Event final table will be televised almost-live (with a 30-minute delay) on ESPN from the Rio in Las Vegas.

Play last concluded on July 15 with nine players remaining. Those nine will hit the felt starting on Sunday with the hope of becoming the 2015 champion, which is worth $7.6 million and a prestigious jeweled gold bracelet.

The players at the 2015 Main Event final table aren’t household names, yet. But that doesn’t mean there aren’t some interesting storylines to follow.

Over the past dozen years, most final table participants have been part of the younger generation. Many in the poker world have said for quite some time that the older poker players can’t compete in these types of tournaments.

Don’t tell that to Pierre Neuville or Neil Blumenfield. These two players have mucked the trend of youngsters at the final table. Neuville is the oldest WSOP Main Event final table participant ever at age 72. Blumenfield is 61.

But the main storyline is Joe McKeehen. At just 24 years old, McKeehen had already made $2 million in live tournament winnings prior to the Main Event. He’s an upcoming poker star and has a massive chip lead.

All eyes will be on McKeehen, the “old” guys, and Federico Butteroni, as he attempts to become the first-ever Italian-born WSOP Main Event champion.

After three players are eliminated on Sunday (or Monday crack of dawn, if play runs really long), the remaining six will come back the following day and play down to three. Play will conclude on Tuesday, November 10th. Each day will be televised semi-live on ESPN in its entirety.

Prior to 2008, there was no November Nine. The final table was played out immediately after the Main Event got down to nine players.

The November Nine concept was made for TV. ESPN decided that airing edited episodes weekly right up until the broadcast played down to nine would build up anticipation for the final table. This concept hasn’t gone over well with everyone in the poker community, but television ratings say it’s been a good thing.

Since the inception of the November Nine, Jonathan Duhamel in 2010 is the only winner that entered the final table as the chip leader.

Although that stat may worry McKeehen, the only other November Niner to enter the final table with at least 60 million chips was Duhamel.

Only one player has achieved the November Nine twice. That man is Mark Newhouse. Oddly enough, Newhouse finished ninth both times, in 2013 and 2014. Newhouse was a short stack in 2013, but entered the 2014 final table with higher aspirations, holding one of the biggest stacks. Unfortunately, luck wasn’t on his side.

I don’t care and I won’t watch it. Since they started November 9 I lost interest in WSOP.

The November 9 format is great. Spreading it out over 3 nights may be a mistake if there are some quick knockouts.