Not-So-Big One for One Drop Day Two Sees Bonomo Rule and Ivey Tumble, as WSOP 2018 Winds Down

Heading into the final table of the 2018 Big One for One Drop (BOFOD) million-dollar buy in championship, Justin Bonomo has a massive chip lead. It’s business as usual for the pro, who’s been slaughtering field after field this year. 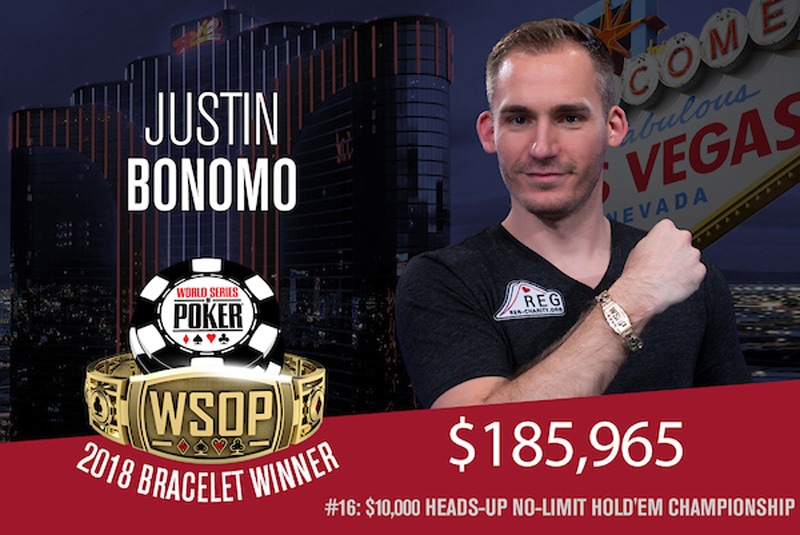 Already a bracelet winner at WSOP 2018, Justin Bonomo is poised for a possible repeat performance and a $10 million payday if he takes first in the Big One for One Drop, which is now down to six players. (Image: WSOP.com)

Tuesday will be the wrap-up for the WSOP summer series, and for Phil Ivey, the BOFOD didn’t go quite as well. Not only did Ivey cap off his summer with yet another disappointing performance, fellow pro Rainer Kempe taught poker fans how to lose a million bucks in 20 minutes flat. It’s turns out that’s easier to do than one might imagine.

The 27-player field is now down to six when play resumes today at 5:30 pm PT.

Heater of a Lifetime Continues

Bonomo will be in a familiar position at the final table on Tuesday: he’s been crushing high rollers all year, with nearly $15 million in live tournament cashes since January 1, including a five-million dollar payday in the Super High Roller Bowl at the Aria.

If he holds on to win the Big One for One Drop, Bonomo will add another $10 million to his 2018 bankroll.

To put things in perspective on how dominant Justin has been this year, if we combined the second, third, and fourth top tournament earners from 2018  — Jason Koon, Stephen Chidwick, Nick Petrangelo — their $22.7 million combined takes would still be less than Bonomo’s $24.95 million, assuming he finishes off his final tournament of the summer on top.

Since January, he’s won nine tournaments, all high rollers, and is going for his second bracelet of the summer (his first was in the $10,000 Heads-Up Championship for $185,965).

Phil Ivey, in his return to tournament poker, is running as cold as Bonomo is running hot. Online poker’s all-time most winning player just can’t seem to catch a break this summer and was eliminated in 8th place in the One Drop, three spots away from the money.

It was a fitting end to a rough series for the poker legend, who kicked off his miserable summer run with a non-cash in the $300,000 Super High Roller Bowl and failed to run deep in any WSOP events, save for a 9th place finish in the $50,000 Poker Players Championship for $111,447.

In total, Ivey had just four WSOP cashes this year, none for more than three times the event’s buy-in. The 10-time bracelet winner is still seeking his first victory since 2014, the last year he played tournaments regularly.

Power Losing at Its Finest

Rainer Kempe late-registered for the One Drop at the start of Day 2, promptly grabbed his five million chips and took his seat inside the Amazon room at the Rio.

Kempe, the 2016 Super High Roller Bowl champion, then went for a four-bet to 1,625,000 and Einhorn then moved all-in and got snap-called.

The board ran out blanks for Kempe and he was sent home, down a mil in less than half an hour.

The remaining six players will return to the Rio at 5:30 for the final day of the Big One for One Drop and the 2018 World Series of Poker. It’s been grand.

Big One for One Drop Chip Counts

The tournament is on the bubble. The remaining five are guaranteed at least $2 million.

Ivey is still the best.

when everything starts to conspire in favor is very good, this is happening in the career of this brilliant player …. in a field of great minds luck is a crucial factor, besides the game well played ….