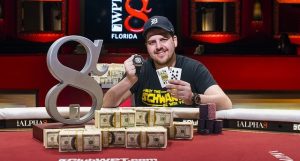 Noah Schwartz beams after winning a WPT Alpha8 title in the Sunshine State, while carving out some poker history for himself. (Image:cardplayer.com)

Noah Schwartz is all smiles after capturing a WPT Alpha8 title and $585,000 at the Seminole Hard Rock in Florida over the weekend. Schwartz also earned some serious bragging rights with a WPT poker tournament first.

Fellow players Bryn Kenney, Jacob Schindler, Byron Kaverman, Jason Mercier, along with perhaps the least likely of them to smile, Daniel Colman, whose insane winning streak in 2014 makes him a scary competitor to anyone these days.

Mercier and Colman each have recent Alpha8 titles to their credit, while Schindler took down a $100,000 Super High Roller event at the Hard Rock last September.

Given the level of high-stakes talent on hand, it was clear from the start that the small field was a tough one, but not tough enough to deny Noah Schwartz both the victory, and that unique bragging right.

A First in Professional Poker

By winning the Alpha8 tournament, Noah Schwartz became the first player ever to hold both a WPT Main Event title and a WPT Alpha8 title. It was an accomplishment not lost on the poker pro from Miami Beach, as he wrote to followers on Instagram:

“What a true blessing & historic at the same time to become the 1st player in history to win @WPT & @alpha8 titles. No one can take that from me. Thanks for all the support it means the world to me:#embeddedmyplaceinhistory  #aimforthestars”

While demonstrating that he was a force to be reckoned with, Schwartz ascended to Alpha8 stardom wearing a t-shirt emblazoned with those famed words of encouragement: “May the Schwartz be with you.”

The six Alpha8 contenders began with 100,000 in chips, and could re-enter through Level 6, although the tournament’s first victim, Bryn Kenney, curiously opted not to rebuy for just another $100k.

Mercier exited next in Level 8, however, after a brutal all-in confrontation with Jacob Schindler in Hand #193. With blinds at 1000/2000/300, Mercier shoved Ad 9s for 201,000 to dominate Schindler’s As 8h. The flop came Jd 7s 4h, with Mercier roughly 80 percent to win, and the turn card of 6d brought Schindler four more outs, but dwindling equity.

The river was a stunning “that’s poker” moment for Jason Mercier, when the 5d smashed the board to fill a gutshot straight for Jake Schindler, thereby denying Mercier a second Alpha8 win to add to his December victory at St. Kitts.

Heads-up and On the Bubble

Schwartz and Schindler each took out a player to arrive heads-up, with Jacob winning against Dan Colman in Hand #211 with Kd Qh > Ah 5d, and Noah dispatching Byron Kaverman in Hand #242 with 3h 3s > Ac 5h.

Heads-up play continued on Day 2, with the final contenders roughly even in chips, and sweating it out on the money bubble. By Hand #321 though, Schindler was severely short-stacked, and shoved 92,000 with blinds at 4000/8000/1000. Schwartz asked for a count, and turned over Qs 9s against Schindler’s Kh 5h.

The board ran out Qd 6c 3c 6s Qh to give Noah Schwartz a full house and the WPT Alpha8 trophy.

In addition to $585,000 to boost his career earnings above $5 million, Noah also took home some serious bling in the form of a Hublot King Power Unico Titanium watch, and a pair of Monster 24K gold headphones.

Very well done MB Hitides grad! We are all Proud of Noah on an off the tables!!