Stand-up comedian and actor Kevin Hart probably wished it was a prank, but alas it was just bad luck on Friday during Day 2 of the €100,000 ($108,955) PokerStars Monte Carlo Super High Roller. 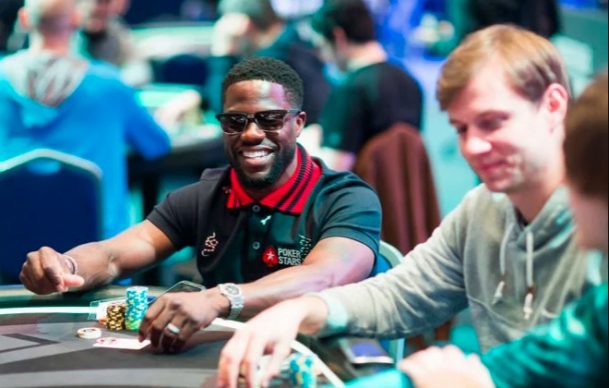 Comedian Kevin Hart played in the PokerStars Championship €100,000 Super High Roller in Monaco and made it to Day 2 before being knocked out. (Image: PokerNews)

The funnyman had his full house busted by a higher one held by Bryon Kaverman to get sent to the rail.

It was the first event since January, when the longtime poker enthusiast played in three high-stakes tournaments at the PokerStars Championship Bahamas, but failed to cash in any of them.

The arrival of Hollywood’s highest earning comedian, who made $87.5 million last year, was fitting for a celebrity, as Hart shared video of his helicopter ride to the Monte Carlo casino and entrance at the tournament site.

He also tweeted before the competition: “Wish me luck people … I’m in Monaco playing in the PokerStars Championship Super High Roller tournament.”

The first day was mixed for Hart. He busted early when he got it all-in with two nines on the flop only to run into Igor Kurganov with pocket aces. But he was able to re-enter for another €100,000 ($108,955) and build up his stack enough to advance to Day 2,

Hart Break on the River

The celebrity A-lister had 7♣7♥ and faced a bet by Kaverman that would put him all-in. Hart immediately called.

Kaverman had A♣4♣ and was rewarded with a favorable flop of A♥3♦A♦. “That’s it,” Hart said, expressing dismay that quickly dissipated when a 7♠ came on the turn. Yet before he could get too excited about making a full house, a 4♠ on the river quickly knocked him back to reality.

“That can only happen to me,” a stunned Hart said as he exited the tournament a little less than his usual smile.