The GPI World Power Rankings have been updated, with Nick Petrangelo topping the charts. The New Englander is off to a strong start for the year. 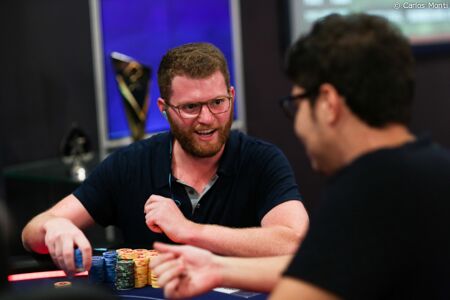 Eric Danis of the Global Poker Index released the top 25 rankings on February 8. All players ranked in the top four during the previous update remain in the same spot. Justin Bonomo and Dan Smith made the biggest jumps.

Bonomo went from 15th to 5th, while Smith is now 9th on the list, after previously being ranked outside the top 25. David Peters, the 2016 GPI Player of the Year, is stuck in 2nd place by a slim margin. The “semi-retired” Fedor Holz is in 3rd place, and Bryn Kenney is 4th.

The Global Poker Index tracks performance in live poker tournaments from around the world. Players accumulate points based on their finish, money earned, and tournament buy-in.

Petrangelo finished 4th in the 2016 Player of the Year race. He already has three six-figure paydays this year, including two at the recently completed Aussie Millions. In the $25,750 PokerStars Championship last month, the New Englander finished 2nd for $740,032.

Justin Bonomo’s stock is rising. The man who loves to fight for social justice already has three deep runs in high roller tournaments this year. That comes after closing out 2016 with a 2nd place finish in a $100,000 buy-in Super High Roller tournament at Aria in Las Vegas on December 30.

Bonomo now has more than $14 million in live tournament winnings. He was one of the top performers at last year’s WSOP, finishing in the top three in four events. But he was unable to get over the hump to win a bracelet.

In total, Kenney already has seven cashes in live poker tournaments this year. He now has more than $13.7 million in lifetime winnings.