Las Vegas oddsmakers expect all four home teams to win this weekend as the NFL playoffs get underway. That’s not necessarily a surprise considering that having a superior record is how they got home-field advantage in the first place. 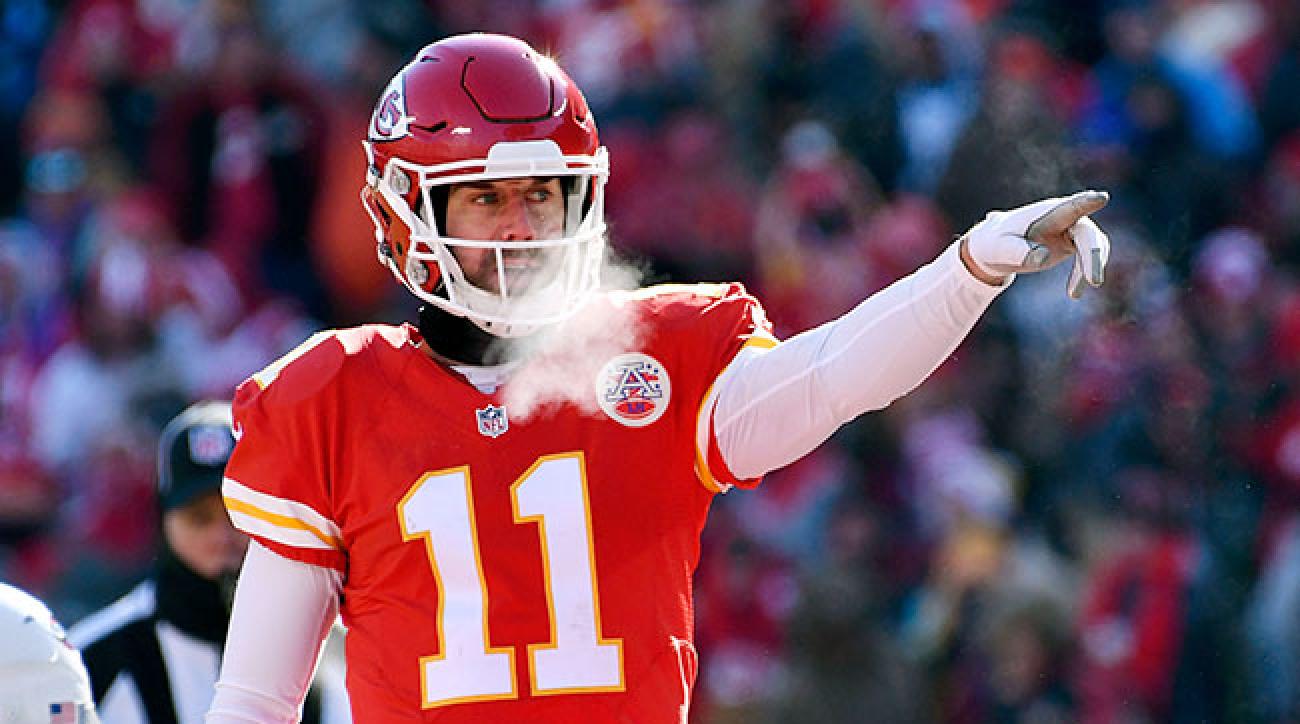 Will Alex Smith be the quarterback who finally leads the Kansas City Chiefs back to the Super Bowl? (It’s been a long time since their last appearance in Super Bowl IV.) (Image: SI.com)

But on the road to Super Bowl LII, teams favored to advance to their conference semifinals next week are Kansas City, Los Angeles Rams, Jacksonville, and New Orleans. And sports bettors know that despite odds picking all as winners, none of these games a sure thing.

Hey, don’t leave it to me to make predictions or tell you where to put your money, but below are previews of what to expect from this weekend’s win-or-go-home gridiron battles.

The playoffs kick off at Arrowhead Stadium in Kansas City at 1:20 pm PT on Saturday with the AFC West champion Chiefs (10-6) taking on the Tennessee Titans (9-7) in a wild-card game.

Kansas City, fresh off a four-game winning streak, is an 8.5-point favorite at most Las Vegas sportsbooks (MGM Mirage, CG Technology, etc.). You can find a better line on the underdog (+9) at Wynn, as of Friday morning.

Kansas City appeared to be the best team in the NFL five games into the season. Quarterback Alex Smith was doing his best Tom Brady impersonation, throwing the ball around like a future Hall of Famer, until the season began to unravel. The Chiefs followed that hot streak up by losing five of its next six games, going from best team to worst team not named Cleveland in a matter of weeks.

Smith recovered from his mid-season struggles, as did the Chiefs defense, to stop the bleeding and finish the season with four consecutive wins. On the other side of the field, Tennessee backed into the playoffs losing three of its final four games, and is lucky to even have this opportunity for an extended season.

Another factor to consider before you bet the mortgage on Kansas City covering the spread, the Chiefs have a miserable playoff record dating back 25 years. Since 1993, when an aging Joe Montana led the team to the AFC Championship, the franchise is 1-9 in the postseason, with their lone win coming in 2015.

If you’re looking for an underdog to ride this weekend, it may be the Atlanta Falcons (10-6). The Super Bowl losers a year ago had a bit of a disappointing regular season. Quarterback Matt Ryan was inconsistent parts of the year and the defense wasn’t much help at times.

But this is a team with playoff experience and the talent to compete with anyone, taking on an inexperienced Los Angeles Rams (11-5) team that many believe overachieved this season.

The Rams, in just their second season back in LA, are favored by 6 points and will have homefield advantage. (Kickoff set for 5:15 pm PT on Saturday).

If the Falcons can pressure quarterback Jared Goff, a task that won’t be easy but is doable, the underdog just might come through for you, possibly even winning straight-up.

At 10:05 am PT, the Buffalo Bills (9-7) will make their first playoff appearance since 1999. Die-hard fans in upstate New York have been waiting for years, but the Bills’ playoff stay could be short-lived, according to Las Vegas oddsmakers and most NFL experts.

The Jacksonville Jaguars (10-6) enter the game at home as an 8.5-point favorite, a margin wide enough to consider this a big upset if Buffalo wins.

The Bills were lucky to make the playoffs. Had Baltimore not blown its lead in the final minute against Cincinnati last week, they’d be sitting at home watching the games on TV.

In the other Sunday game (1:40 pm PT), the Carolina Panthers (11-5) head west to face the New Orleans Saints (11-5) in one of the most intriguing first round matchups in years.

New Orleans is a touchdown favorite at most Las Vegas sportsbooks (-6.5 at Wynn), as of Friday morning. This game is likely to come down to how effective the inconsistent quarterback Cam Newton plays for Carolina.

The Saints have an explosive offense, and not just quarterback Drew Brees, a future Hall of Famer. This team made significant strides this season thanks in large part to its improved running game. Mark Ingram and Alvin Kamara combined for 1,900 yards on the ground, making this balanced offense tough to stop.

Both teams are suspect defensively, however, allowing just over 20 points per game, but the Saints get the edge from oddsmakers due to homefield advantage and a more explosive offense. It should be a high-scoring affair, so that over/under of 48 might be enticing.

I thought this was a poker news site?

The home teams might be favored but there always upsets in wild card round. The first two home teams already lost and look out my Panthers will go into New Orleans and smack those Aints Sunday Evening. We opened as 6.5 pts underdog but thats ok e will win this one! Its a good bet for any betting persons out there.