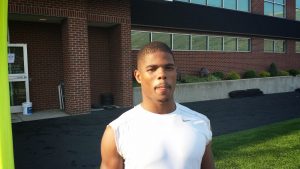 NFL star and poker fan Corey Tindal escapes with his life after being robbed at gunpoint during a private game. (Image: collierszlive.blogspot.com)

Corey Tindal, the Cincinnati Bengals’ rookie cornerback, was held at gunpoint and relieved of his bankroll during a poker game in Huntingdon.

Tindal has just become a full-time NFL player after ending his college career with Marshall early. After going undrafted in April, Tindal was eventually picked up by the Bengals, but it seems as though his newfound status hasn’t helped his poker career.

According to an incident report by Cabell County Sheriff’s Office, Tindal was playing poker with three friends at a Motel 8 in Huntingdon when disaster struck. One of the players in the game was a friend of Tindal, but the two additional players were unknown to him.

Despite being unfamiliar with the two men, Tindal decided to play anyway. Unfortunately, at some point during the game it’s stated that one of the unknowns took out a gun.

Forcing Tindal and his friend to the ground, the man allegedly struck Tindal twice with the barrel of the gun before demanding him to turn over his possessions.

The incident came to an end after the armed man and his accomplice fled the scene with between $2,400 and $4,000 in cash as well as rental car keys and cell phones.

Police officers are now searching for the two men who are believed to be from Detroit, but a further investigation by the NFL’s security team is also likely to take place.

Tindal Lucky to be Alive

Although Tindal and his friend won’t face any charges relating to illegal gambling, NFL officials will probably want to know what he was doing playing poker for money in a hotel with two unknown men.

While these investigations are likely to continue for a few weeks, Tindal is just happy to have escaped the situation with his life. Soon after the ordeal he tweeted that “god really is good” followed by the pray emoji.

Incidents involving guns and home games are, unfortunately, not uncommon in the poker world.

However, this is one of the first times we’ve seen a high profile athlete put in the line of fire while playing a game he loves.

Ok this sounds horrible, but is it fair to say he was out of position “Under The Gun”?