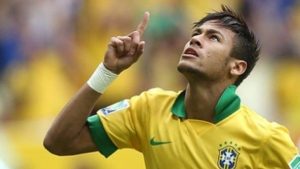 Neymar is one of the top young players in the world of soccer. (Image: Neymar/Instagram/FCBarcelona.com)

Neymar Jr. is one of the world’s great soccer stars, and has been responsible for leading Brazil and his club team, FC Barcelona, to numerous victories over the years.

Now, the sporting legend is joining up with another team that seems to score plenty of wins: PokerStars.

PokerStars announced Thursday that they have signed Neymar as a PokerStars ambassador, making him just the latest in a series of global sports superstars to represent the brand.

Neymar isn’t even the first Brazilian soccer player to be a part of the team: retired soccer legend Ronaldo has been an ambassador for PokerStars for some time now.

Neymar has previously expressed an interest in poker, as he has shared plenty of photos and videos on Instagram that show him playing the game. He has even named his dog “Poker,” and says that the game gives him another outlet for his competitive tendencies.

“Growing up and playing football everyday has made me a competitive person,” Neymar said. “When I’m not playing football, playing poker and competing against my teammates on the road or in home games with friends is one of my favorite things to do.”

PokerStars has been pursuing some very specific types of individuals for their pro teams and ambassador programs, with players in Asian markets and Twitch streamers with big online followings being the obvious examples.

Sports stars are another group they have been targeting, as they tend to have wide appeal with the same demographics that have traditionally been seen as poker players: namely young, competitive individuals, particularly men.

That’s why Neymar is just the latest in a stable of world-class athletes that are now representing PokerStars. Spanish tennis superstar Rafael Nadal is also part of the team, as is Fatima Moreira de Melo, campaign of the Holland field hockey team that won gold in the 2008 Beijing Summer Olympics.

Soccer star Cristiano Ronaldo has also been rumored as a target for PokerStars, though nothing has been announced officially quite yet.

Last month, Zlatan Ibrahimovic was said to be near a deal with PokerStars as well, but ultimately turned down a multimillion dollar offer to sponsor the site.

With soccer being the world’s most popular sport, and Neymar being one of the brightest stars in the game, the signing was a no-brainer for PokerStars.

“Neymar Jr. is a young and extremely charismatic megastar who loves interacting with fans on social media, is comfortable on camera, and loves the game of poker,” said Amaya Chairman CEO David Baazov.

“And as a superstar with one of the world’s most famous football clubs and football nations, his appeal is global. This partnership is a great opportunity to market the game of poker across the globe and attract new fans.”

At just 23, Neymar stands out as one of the top young strikers in the world of soccer. Since joining Barcelona in 2013, he has scored 30 goals in 56 appearances; he has also scored 43 times in 62 games for the senior Brazilian national team.

The signing comes just one day after Neymar and Lionel Messi led Barcelona to a huge 3-0 victory over Bayern Munich in the first game of their Champions League semifinal.

Messi scored two goals, and Neymar added a third in the final minutes of the game to secure the victory.

I am not a fan of Neimar, but I think a good move on the part of the poker room. Many fans of the Brazilian game even more turned his attention to poker