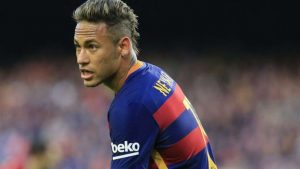 Neymar Jr in the clear over transfer fee issue, but he could still face tax evasion charges. (Image: bbc.co.uk/AFP)

PokerStars ambassador Neymar Jr may still be facing a prison sentence for alleged tax offences, but at least his transfer dispute has been settled.

Earlier this year, in between his exploits on the soccer pitch and his time playing poker, Neymar found himself in the middle of two messy court cases.

Although the Brazilian soccer star is still on the hook for supposedly not paying tax on some undisclosed payments made to him during the transfer, the conditions of his sale have now been settled.

At the time of Neymar Jr’s move from Santos to Barcelona, media reports suggested the transfer fee paid by the latter was $63 million. But, according to Barcelona club member Jordi Cases, the fee was actually closer to $110 million after various undisclosed payments were made.

Cases filed a lawsuit against former Barcelona president Sandro Rosell for misappropriation of funds, essentially accusing him of hiding the true value of the transfer behind a number of bogus contracts. In a bid to bring a close to the issue, Barcelona paid a $5.7 million settlement to Cases but the case still went to trial.

With the case threatening to bring more misery to Rosell, current Barcelona president Josep Maria and Neymar, the soccer club’s board voted to absolve those involved.

Voting at a rate of 14-2 in favor of the motion, the club then presented its result to the Provincial Court of Barcelona where it was ratified.

“On Wednesday morning, at the headquarters of the Provincial Court of Barcelona, the legal representative of FC Barcelona ratified the writ of conclusions and approval in relation to the open proceedings concerning the signing of the player Neymar Jr. The ratification of the agreement was signed jointly along with the Public Prosecutor’s Office and the State Attorney’s Office,” read a statement from the club.

Issues Gone but Not Forgotten

While Neymar Jr has done his best to stay out of the spotlight whenever the legal issue has raised its head, it could still affect his poker aspirations going forward. Although the club may be in the clear over his transfer deal, the man himself may still have to serve a two-year prison sentence and pay a $10.6 million find if he’s found guilty of tax evasion.

For his poker sponsor, this legal problem certainly isn’t ideal. Neymar Jr was drafted in to help push the mainstream appeal of PokerStars, but his recent bad boy image will likely be something the operator wants to distance itself from.

Although there has been no suggestion that PokerStars is considering dropping him as an ambassador, a guilty verdict would almost certainly be the death knell for his poker career.

With poker operators already treading carefully due to previous brushes with the law in the US and beyond, it’s unlikely a site like PokerStars will want to bring more heat on itself with a freshly convicted soccer star as a public figurehead.