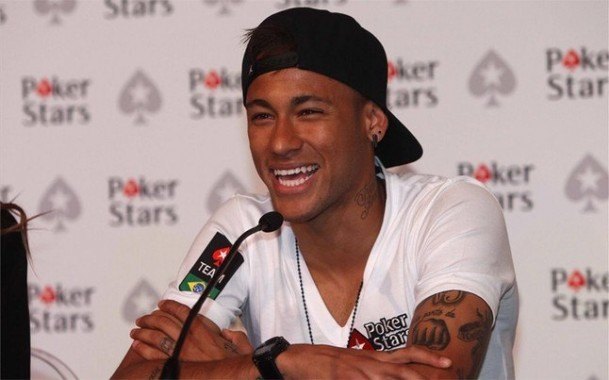 Neymar is one of several high-profile athletes serving as ambassadors for the PokerStars brand. (Image: PokerStars)

Neymar Jr is one of the world’s biggest soccer stars, having made magic happen on the pitch more than a few times during his career.

But the Brazilian superstar is now also one of the featured ambassadors for PokerStars, and it turns out that he can create some special moments at the poker table as well.

Neymar took to Instagram over the weekend to share what will likely be one of the most memorable hands of his poker career with his fans, one in which he made himself a royal flush.

It’s hard to tell exactly what went on in the hand, as the screenshot posted by the sports megastar only shows the board, the pot, and his hand. But what we can say for sure is that Neymar’s royal came in spades, and that it took a runner-runner to get there.

Neymar started with A♠J♠, and got the first part of his big hand on a 5♣K♠4♥ flop. The T♠ gave him a huge draw, and the river showed up as the Q♠, finishing off the best hand in poker.

As with just about anything Neymar does, the exciting hand immediately made waves around the world. At the time of this writing, the image of the royal flush had over 500,000 likes and 150,000 comments, all generated by the more than 30 million followers that the 23-year-old has attracted.

Neymar joined PokerStars as an ambassador in May, one of several major international sports stars that have become a part of the online poker giant’s marketing efforts. At the time, Neymar Jr. said that he was not just another athlete seeking an endorsement deal, but a fan of the game who was excited to be a part of the PokerStars family.

“Growing up and playing football everyday has made me a competitive person,” Neymar said at the time. “When I’m not playing football, playing poker and competing against my teammates on the road or in home games with friends is one of my favorite things to do.”

Other athletes that are being utilized by PokerStars include two famous Ronaldos: Portuguese superstar Cristiano Ronaldo and the retired Brazilian legend who is widely known simply as Ronaldo.

Outside of soccer, tennis legend Rafa Nadal has become one of PokerStars’ most recognizable faces in Spain, while Dutch field hockey captain and Olympic gold medal winner Fatima Moreira de Melo is also an ambassador for the site.

Most recently, Neymar and Cristiano Ronaldo have appeared in commercials for PokerStars. The ad campaign is said to be the biggest advertising push yet for PokerStars.

The big win with an even bigger hand might have some fans dreaming of a poker career for Neymar once his soccer days are done. But it would probably take a lot more than a few thousand euros for Neymar to give up his day job just yet.

Neymar currently makes €12 million ($13.9 million) per year at Barcelona. Add in an estimated $17 million in sponsorship money, and Forbes estimates his 2015 earnings to be approximately $31 million.

neymar is smart on the pitch he must also be playing poker … what kind of endorsment deals do they have ?? they play to attract and they get paid ?? or is it from the ads ??

Neymar certainly is exciting to watch on the soccer pitch , as are his Barcelona teammates .