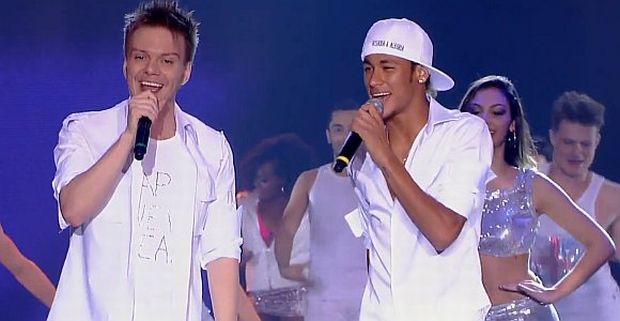 Neymar Jr is undoubtedly one of the sports world’s greatest stars, and his PokerStars Team Sports Pro sponsorship has shown he has some skills at the felt too. But nobody is good at everything, and the young Brazilian may have hit his very own Peter Principle with the release of his first online music video.

Or, he may be preparing for a move into the comedy/satire realm, who knows. We’ll let you decide.

It’s true that the soccer superstar has long been a lover of music, and has numerous YouTube videos to prove it. The Barcelona forward has appeared on stage with a number of artists, including one of Brazil’s biggest pop stars, Michel Teló.

His vocal abilities aren’t quite at the same level of his athletic capabilities, and based on his latest self-created video release, neither are his piano-playing talents. He’s also borrowed Ryan Lochte’s bleached blonde hair look (which Lochte has already dropped), and it doesn’t seem to be bringing him any more smart decisions than it did to the American Olympian swimmer.

Announcing the news on Twitter earlier this week, Neymar wrote that his first project will be titled “Neymusico,” and released via his Facebook page. At the time of writing the Brazilian had posted a teaser video of his first song “I Need,” but judging by the performance and a friend’s reactions in the background, there’s a chance he’s taking his fans for a ride.

Whether or not Neymar Jr. is actually planning on a music career, it almost doesn’t matter. The video has already notched up 6 million+ views. In fact, it’s this global fan base that PokerStars has been trying to tap into ever since it signed the poker enthusiast.

With the poker market moving increasingly towards the casual player, mainstream stars like Neymar have become an integral part of many operators’ PR campaigns. While it’s unlikely PokerStars will be utilizing Neymar Jr.’s vocal talents for its next commercial, poker players and music do have something of a history.

The late Dave Ulliott, aka the Devilfish, was never far from a microphone and guitar. Besides entertaining players at the felt, the Brit recorded his own version of the arguably Top Ten Most Awful Songs of All Time, “Chocolate Rain.” Marcel Luske was also known for his musical outbursts at the table, while American Prahlad Friedman performed a self-penned rap for ESPN’s coverage of the 2009 WSOP.

Beyond poker players showing off their skills, established artists have also picked up on the popularity of the game and incorporated references and luminaries in their songs. Well-known to UK and EU audiences, at least, was when online star Ilari Sahamies, aka Ziigmund, appeared in a rap video with Finnish group Teflon Brothers.

Finally, we can’t forget parody performer SrslySirius. Taking the community’s top stories, in jokes and famous faces, SrslySirius made some of the most entertaining poker songs in recent memory, and certainly brought a touch of levity to some otherwise serious issues.

Can Neymar Jr. bluff his way to a Hot 100 hit? Probably not, but it will certainly be interesting to see if he can carve out a niche in the pop world the way he has in poker. Maybe a career in standup will follow suit.

We would be remiss if we didn’t leave you with this great moment in music from the Devilfish:

He really is into singing, I though he was just focus on football.