If you’ve ever wanted to watch an exciting deep run in a poker tournament while, simultaneously, getting insight from one of the players in the game, now is your chance. French poker site Winamax recently released the first two, 40-minute episodes of its “Inside the Mind of a Pro” series on its YouTube channel — now complete with English subtitles — featuring Triple Crown winner Davidi Kitai as he pursues his fourth World Series of Poker bracelet in the $5,000, Short-Handed No-Limit Hold’em event at last summer’s WSOP. 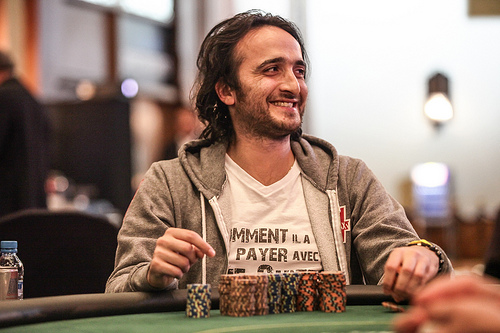 Davidi Kitai’s run in the 2019 WSOP $5,000 Short-Handed NLH Event is featured in the first episodes of Winamax’s “Inside the Mind of a Pro” series on YouTube. (Image: clubpoker.net)

Winamax’s series isn’t like an ESPN telecast of a WSOP tournament, however. It’s more akin to a Daniel Negreanu vlog. After flashing scenes of Las Vegas nightlife, the first episode shows Kitai doing yoga and spending time with his family at his Las Vegas rental house before heading off to do battle at the Rio.

The Belgian pro discusses his strategy of going to the series later in the summer in 2019 to focus on the biggest tournaments. A teaser for the videos describes them as “a vivid, first-person description of the emotional roller-coaster a player goes through while vying for millions at the highest of levels.”

Winamax spokesperson Benjamin Gallen told CardsChat that the current season will be the longest yet, with 30 episodes.

“When the player we follow runs deep in the tournament we chose, that means we end up having lots of content to produce, and lots of episodes,” Gallen said in an email. “I won’t spoil it for you, but let’s say that among players we followed last summer (six of them in total, across three WSOP tournaments), some of them did REAL well.”

While Winamax doesn’t expect its new channel’s videos to get the million views that some of its French Youtube channel episodes have gotten, “we hope the show finds a new audience,” Gallen said.

One or two episodes will be released on the channel each Monday morning at 5 am ET.

Path to the WSOP

Gallen said Winamax has developed a good rapport with the WSOP since its team members made initial trips to the festival in 2008. Its reporters have covered the event since 2007. The company is also the exclusive provider of online WSOP satellites for France-based players. That strong relationship led to the company receiving permission to shoot full episodes at the Rio for its “Inside the Mind of a Pro” series.

“The fact that the show had already found an audience and generally looked stunning helped,” Gallen said.

“Being able to film inside the ropes is a huge privilege, and we try our very best to hold up to it,” he added. “Our crew tries to be as invisible as possible during the shooting sessions.”

While Gallen admits that Germans have dominated poker among Europeans for many years, he said the French have a lot of strong, up-and-coming players. These include pros likeWinamax team players Romain Lewis, Ivan Deyra, Pierre Calamusa, and Adrian Delmas.

“Speaking strictly in terms of numbers, Germans [have] won 40 bracelets at the WSOP,” Gallen said. “We are still lagging behind with 22, but I have no doubt we will eventually catch up at some point.”