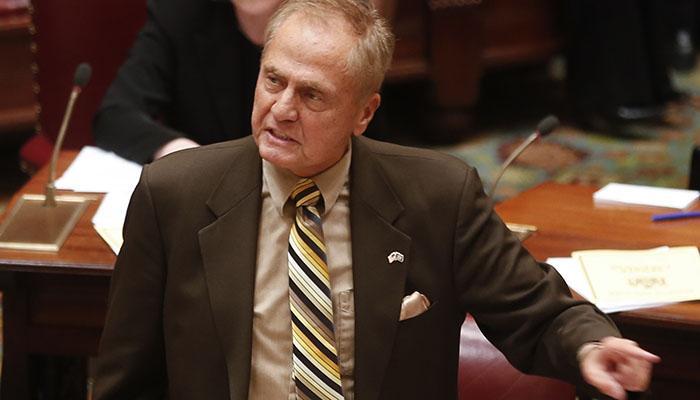 New York State Senator John Bonacic is committed to improving his online poker bill, even if New York is not likely to pass it any time soon. (Image: Mike Groll/AP)

New York State isn’t going to see online poker in 2015, and it’s realistically further off from passing a bill than other states like California or Pennsylvania.

But that’s not stopping at least one lawmaker from continuing to revise his Internet poker proposal to give the game the best possible chance in future legislative sessions.

New York State Senator John Bonacic (R-Mt. Hope) introduced bills in both 2014 and 2015 that would allow the state to license online poker sites for an intrastate market, similar to what’s been done in New Jersey and Nevada.

In his vision for online poker, Bonacic sees New York as possibly offering up to 10 licenses, each of which would come with a $10 million fee and be valid for 10 years.

The 2015 bill was similar to the version Bonacic brought to the table in 2014, with one major exception: it did not include a bad actor clause, one that would have excluded operators (namely, PokerStars) who continued to serve American customers after the Unlawful Internet Gambling Enforcement Act (UIGEA) went into effect in 2006.

According to Bonacic, he was convinced that treating such operators on a case-by-case basis was better than putting a blanket ban into his law.

“I felt that it would be best for the gaming commission, when performing the proposed suitability review, to determine whether or not certain organizations should be authorized to conduct online poker based upon their previous actions,” Bonacic told GamblingCompliance.

Now, after a recent hearing on the issue, the senator says that he is looking to make even more changes to his bill. The early September hearing, held by the Senate Racing, Gaming and Wagering Committee, saw representatives of major gaming entities like Caesars Entertainment and MGM Resorts lend their opinions on how New York might best implement online gambling.

Among the possible changes are a potential reduction in licensing fees, after some officials expressed concern that the state’s racinos may not be able to afford to get into the industry at such a high price.

Regardless of what Bonacic does to his bill, however, most observers are confident that it won’t be going anywhere in the near future. Even Bonacic has acknowledged that for now, the bill will have more impact in terms of laying the groundwork for future consideration than as something that could potentially move into law.

In an interview with Time Warner Cable News, Bonacic said that even in that regard, his attention to the online poker legislation was limited because of a more pressing matter: the three (and potentially four) casinos in New York that are waiting to officially receive their licenses.

“I’ve told the proponents of the [online poker] bill that I would take it and study it, but I was more interested in seeing that the three casino licenses would move forward, and I didn’t want to muddy the waters for the path that the casino licenses were on,” Bonacic said. “I didn’t expect them to move this slow, but we’re optimistic that at the end of this month, at least the one in Sullivan County will get its license and be ready to go.”

The Sullivan County casino in the Catskills and a second casino in Schenectady appear to be moving forward, while a Finger Lakes casino at Lago has faced legal challenges. Meanwhile, some officials and developers in the Southern Tier region are pushing for the state to award a fourth license to a local proposal.