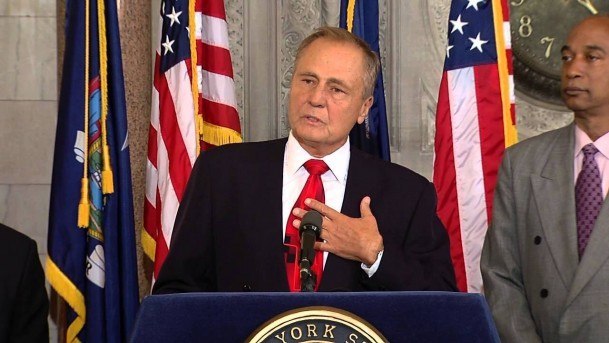 New York State Senator John Bonacic’s pursuit of a hearing for S05302 suggests that he’s serious about online poker regulation for next year for the Empire State. (Image: youtube.com)

New York State Senator John Bonacic (R-42nd District) says his online poker bill S05302, which was introduced to the Senate this past May, will receive a hearing next month.

Bonacic told Gaming Compliance this week that New York Senate Racing, Gaming and Wagering Committee will meet to discuss the viability of online poker regulation in the state at that time.

Bonacic’s bill has failed to gain any momentum in the legislature this year, and September’s meeting is merely an information gathering exercise.

But the hearing does suggest that Bonacic has a serious commitment to pushing online poker in the 2016 legislative session, offering a glimmer of hope for the Empire State’s poker players.

The senator says that representatives of Caesars and MGM Resorts, as well as “all of my casinos, racinos and OTBs,” will be present at the hearing.

Online poker does have a strong support base in the New York legislature, but the issue played second fiddle this year to the state’s land-based casino expansion efforts, as new gaming licenses were awarded to allow for several new brick-and-mortar gambling projects upstate.

The argument for regulation in the state is a convincing one. A study commissioned last year by MGM Resorts suggested that New York residents could be spending as much as $110 million a year on the offshore online poker market.

Furthermore, it’s estimated that with a population of 19.75 million, far higher than any of the states that have opted to legalize online poker so far, regulation could boost state coffers to the tune of $50 million to $80 million.

Assemblyman Gary J Pretlow (D-89th), chairman of the New York Senate Racing, Gaming and Wagering Committee, recently argued in favor of regulation and against the Restoration of America’s Wire Act (RAWA), in an op-ed for Roll Call.

“[Online poker regulation] proposals are responsible and reflect the very core of what we should be doing: leveraging business opportunities to help our state,” he wrote. “In New York, our lottery helps to fund education, to the tune of $3.11 billion dollars in fiscal 2014-15 alone.

“That’s 14 percent of our state’s overall funding to educate over 2.7 million students. RAWA would ban online lotteries, risking education dollars in New York and over a dozen other states around the country.”

S05302 is Bonacic’s second attempt to regulate online poker in two years. This year’s bill was notable by the absence of the “bad actor” language of its predecessor, suggesting that New York could push for an inclusive and open online poker market that might one day include PokerStars.

It proposes a reasonable tax levy of 15 percent on gross gaming revenue, and suggests no more than 10 licenses should be issued, valid for 10 years following payment of a hefty licensing fee of $10 million.

online poker could produce 50 to 80 million for New York state ? ahahahah . not likely , after seeing the results from New Jersey, Delaware and Nevada !