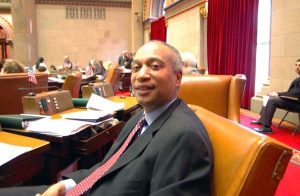 Gary Pretlow argues that RAWA will only serve to harm states, not protect them. (Image: Times Union/Irene Jay Liu)

As the Restoration of Wire Act continues to wait for potential action in Congress, it has become clear that state lawmakers are pretty much on one side of the issue.

Nearly every time we hear of a state-level politician weighing in on RAWA or other federal bans on Internet gambling, the state officials are clearly saying that they’ve always dealt with gaming issues themselves, and they can continue to handle them just fine, thank you very much.

The latest legislator to weigh in on this issue is Assemblyman J. Gary Pretlow (D-89th District) of New York.

In an opinion piece he wrote for Roll Call, Pretlow came out against RAWA, saying that states should be able to make such decisions for themselves.

“State Legislatures like ours in New York are taking the lead in advancing proposals to enhance economic growth, empower our local economies and keep consumers safe,” Pretlow wrote. “This is why it is particularly troubling that one thing some members of Congress are intent on passing is legislation that would ban online gaming nationwide.”

According to Pretlow, who serves as the chairman of the Assembly Committee on Racing and Wagering, he has kept an eye on the online gambling regulations put into place in New Jersey and Delaware.

Rather than the problematic expansion of gambling that RAWA supporters predicted, he says, they have instead created “well-regulated systems” and “a legal system where law enforcement can crack down on the fraud and any other illegal activity that currently runs rampant in the robust online black market.”

“In New York, we are considering bills to allow online poker,” he wrote. “Similar discussions are taking place among policymakers across the country. These proposals are responsible and reflect the very core of what we should be doing: leveraging business opportunities to help our state.”

So far, attempts to introduce online poker in New York have failed, but there does seem to be at least a little interest in the topic in the state legislature.

State Senator John Bonacic (R-42nd District) most recently introduced an online poker bill this May, after a similar bill failed to achieve any movement last year.

The bill would allow for up to ten operators to offer online poker in New York, and would tax operations at 15 percent.

There have been reports that MGM Resorts have been lobbying for Internet poker in the state, which would be one of the largest intrastate markets in the country were it to begin offering the games online.

That’s not to say that people aren’t playing online poker in New York already, a fact that Pretlow was quick to point out in his op-ed.

“Prohibition doesn’t work, it merely exposes children and consumers to a system primed to exploit them,” he wrote. “What does work? I well-regulated and highly advanced system based on secure technology and fully integrated with our law enforcement’s needs.”

RAWA has been reintroduced into both houses of Congress this year: in the House of Representatives by Congressman Jason Chaffetz (R-Utah), and in the Senate by Senator Lindsey Graham (R-South Carolina).

However, Pretlow suggested that Congress find other things to spend their time debating.

“Congress should focus on the things that will help states, not those policies that aim to take away our power to do right by our constituents,” he wrote.