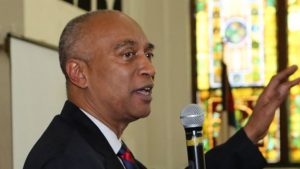 New York Assemblyman Gary Pretlow (D-Mount Vernon) said this week he was willing to challenge the federal ban on sports betting in the US and to prepare legislation that would legalize it in his state.

Buoyed, perhaps, by the success of legislation to regulate fantasy sports in New York, Pretlow said he would turn his attention to the even thornier subject of traditional sports betting for the forthcoming legislative session.

Pretlow, who is chairman of the Assembly Racing Committee, co-sponsored the state’s DFS legislation, which was signed into law by New York Governor Andrew Cuomo earlier this month.

With his DFS co-sponsor in the Senate, Senator John Bonacic, he was also behind the state’s online poker legislation, which passed easily through the Senate but stalled in Pretlow’s own chamber. Pretlow failed to grease the skids of his poker legislation by offering the opinion publicly that poker was “not a game of skill” and giving it a 1000-1 shot at hitting the Assembly floor.

But while Pretlow may not be 100 percent sure about poker, he declared himself this week to be a “believer in legalizing sports betting” and was ready to challenge federal law, as New Jersey has attempted to do unsuccessfully for several years.

“I’m considering this year putting in legislation similar to New Jersey’s legislation, and hopefully it gets to court in the Second Circuit, and hopefully we get a different opinion,” he told the Democrat & Chronicle.

But, as Pretlow acknowledged, it’s a long and winding road that lies ahead: “Any discussion of legalizing sports betting in NY is premature at this point,” he said. “There are significant legal issues to consider before undertaking this endeavor.”

No Joy for New Jersey

In the event that Pretlow’s promised legislation is accepted by both houses, and that’s a big “if,” it’s difficult to see why a federal court would be as accommodating, especially when New Jersey’s legal challenges have been so resoundingly rebuffed in the past, most recently as two weeks ago. And before it even got to the federal courts, New York would likely require a constitutional referendum to authorize such an amendment.

In 1992 the Professional and Amateur Sports Protection Act sought to define the legal status of sports betting (as opposed to pari-mutuel horse and dog racing) and ultimately prohibited it nationwide, with carve-outs for states that had legalized it before 1992: Nevada, Delaware, Montana and Oregon.

New Jersey was given a 12-month window in which to legalize too, but chose not to do so, a decision it now regrets. In 2011, New Jerseyans voted overwhelmingly in favor of legalizing sports betting in a nonbinding referendum and the state has been fighting for its right to do so in the federal courts ever since.