Daniel Negreanu at times has been almost as rabid about golf as he is about poker, and now he’s getting a chance to cross over as both a spokesman and contestant in the inaugural season of the Major Series of Putting. 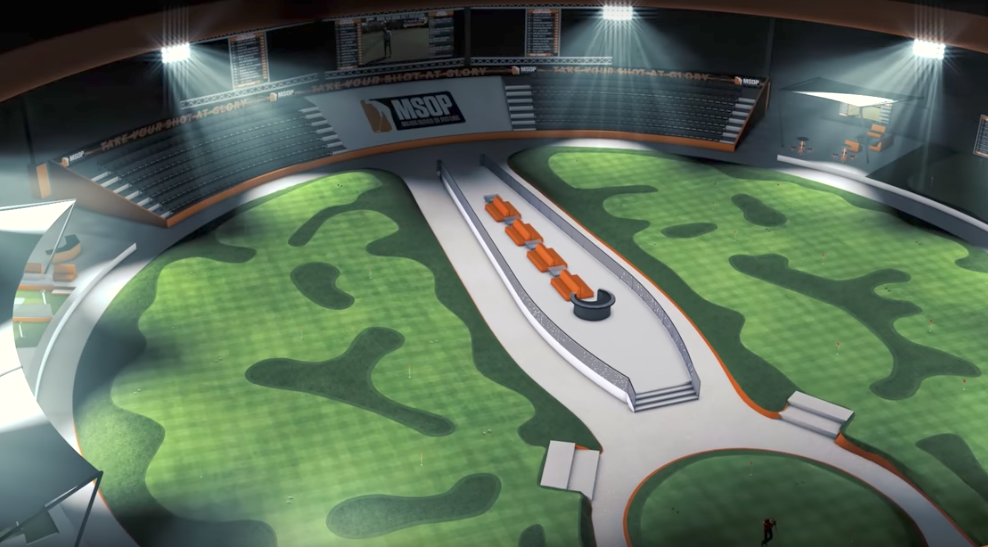 Artist’s rendering of the world-class putting stadium being built behind Planet Hollywood to host the MSOP, a series of poker-like putting competitions that Daniel Negreanu hopes to win. (Image: YouTube / MSOP)

The MSOP championships will take place Oct. 27-Nov. 5 in Las Vegas, and invites competitors to putt for prize money in 20 tournament-style events, with payouts reportedly ranging from $50,000 to $250,000.

Negreanu’s outgoing personality and his immense popularity gives the new venture instant recognition with a demographic of poker players the new sport wants to reach. Kid Poker joked in a release that he was ready for the challenge.

“I happen to be one of the top five putters in the world, according to me, and as someone who enjoys a leisurely game of golf, this is a great opportunity to school other competitors.”

Just as poker offers rank amateurs the chance to compete against the pros, the MSOP presents a competitive putting league that allows golfers of all levels to play against some of the golf world’s best.

The MSOP started having qualifiers in January and visited 18 cities, holding 250 tournaments at local courses and clubs from January to March. In April, the organization announced 250 more qualifying locations across the US and Canada.

Winners of various events will be coming to the Las Vegas Championships, to be held this fall at a specially constructed 20,000-square-foot putting “stadium” behind Planet Hollywood.

The 18-hole course being built by Nicklaus Designs and Southwest Greens features distances from 10 to 50 feet, with par set at 2 strokes per hole.

Negreanu started playing golf semi-seriously in the early 2000s, and quickly got schooled by a couple of fellow poker pros, Doyle Brunson and the late Chip Reese. He told Golf Digest how the pair hustled him.

“I should have known I was in trouble,” he said. “They offered me a certain number of strokes, and I agreed. Later, I found out that they had never seen anything like that. Nobody just agrees. Usually there’s a ton of haggling. My first day out, I lost $550,000.”

Negreanu’s gambling on the greens continued over the years. He tells stories of being down a million dollars to Phil Ivey before clawing his way back, and in 2008, a YouTube video shows him playing a two-man team event against Patrik Antonius for $40,000 a hole.