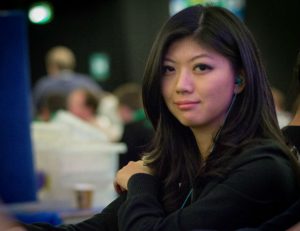 Liu, who is of Asian descent, is part of a three-strong team now in charge of flying the flag for Asia’s latest online poker room.

According to the site’s About Us page, Natural8 currently holds a full gaming license in the Philippines and offers a combination of sports betting, casino games and poker.

In addition to being fully licensed, Natural8 claims its defining feature is a focus on “recreational players.”

Working under the ethos that players should be having “fun,” Natural8 claims to be one of Asia’s most popular gaming platforms.

A Chance to Engage New Demographics

With this in mind, it’s no surprise that Liu has been signed to become part of “Team Hot.” Despite being a serious player with more than $1.6 million in live tournament earnings, Liu is a regular on Twitch.

Streaming under the moniker XuanLiu, the Canadian pro has just over 2,000 followers who all tune in to see her talk through a $100 to $10,000 bankroll challenge.

As well as providing color commentary, Liu’s small stakes adventure is the perfect hook for recreational players and, now, members of Natural8. In fact, over the last two years, the trend among poker operators has been to tailor their marketing efforts towards recreational players.

In fact, PokerStars as well as Liu’s former sponsor, 888poker, have both introduced games designed primarily for novices. Fast-fold cash games, lottery-style sit & go tournaments and even webcam poker games at 888poker have all targeted new demographics in recent years.

Natural8 has clearly tapped into this trend and it will be hoping that Liu’s Twitch presence will help engage even more recreational players.

Pros to Promote Poker Across Asia

Joining Liu on Natural8’s pro team is former Asian Player of the Year Kitty Kuo and Korean-American Dong Kim. With plenty of live final tables between them as well as a SCOOP title for Kim, the two Asian players will likely serve as inspirational figures for players across the Philippines and the Asian continent.

Although the Philippines is considerably smaller than other Asian countries such as China and Japan, it’s still home to almost 99 million people. That figure puts it ahead of every European country except for Russia, a fact which highlights the potential of poker both in the Philippines and greater Asia as a whole.

Enlisting the services of high profile players like Liu, Kim, and Kuo is undoubtedly a smart move by Natural8, but it could also help promote poker across the continent.

While this recent announcement might not cause the region to open up completely, it’s certainly another positive step forward for local players as well as international grinders.

I may be interested in adding another poker site to my current list of poker sites. Need to check if it is U.S. friendly and if I can sign up under Cardschat.