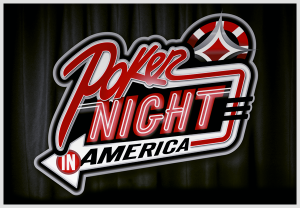 More poker TV: producers of “Poker Night in America” have a new series, “The Final Table,” ready to hit television. They just don’t have a network nailed down yet. (Image: Thecardroom-norcal.com)

A new poker TV series is in development from Rush Street Productions, the production company that gave the world the hit syndicated television show “Poker Night in America.”

Called “The Final Table,” it will present a similar format to most televised poker shows, but with a few original features. Play will include a 60-second shot clock, and each player will be given time bank chips that are used to extend the clock during difficult decisions.

“Poker Night in America” airs on the CBS Sports Network and live streams on Twitch, featuring a mix of cash game sessions and tournaments. Many top pros, such as Phil Hellmuth, Antonio Esfandiari, and Shaun Deeb, have appeared numerous times on the series.

“The Final Table,” according to a press release, will have some of the same poker stars. CardsChat spoke with Dustin Iannotti, the show’s executive producer, to discuss what viewers should expect from the new production.

CardsChat:  Is “The Final Table” replacing “Poker Night in America,” or is this a separate show completely?

Dustin Iannotti:  Not at all. “Poker Night in America” has done very well on CBS Sports [Network] during a time when a lot of other poker shows left the US market. As a result, the production team behind them has been afforded the opportunity to create another show, and they brought me in the oversee it as executive producer.

CC:  Will “The Final Table” air on CBS Sports Network or is this only to be aired on Twitch?

DI: “The Final Table” will air on television on a network that we will announce shortly . You will also have the opportunity to see streams live on Twitch when final table takings occur at one of our partner casinos.

We are planning on taking fans and followers on the journey of creating this show with us. We’ll pull back the curtain and provide behind-the-scenes decisions, photos, and videos on everything from choice of logos and set design, to rehearsals for episodes with the hosts Phil Hellmuth, Maria Ho, etc.

Tournaments and cash games set to air on “The Final Table” are pre-taped and have already taken place. There are six different locations around the United States that are hosting events for the show.

Coincidentally, the first episode of “The Final Table” will air the same day as the Global Poker League draft. Poker isn’t nearly as popular as it was a decade ago, when dozens of poker shows were popular, some of which aired on mainstream networks such as ESPN, Fox Sports, and NBC.

The GPL show and “The Final Table” add two new programs in an era where the number of people playing poker is on the decline. So that begs the question, is there a poker content overload? That question will be answered after these two new series kick off.

No Gabe Kaplan commentary, no care.

Yeah, kinda surprised Gabe isn’t involved with this. The show could be good. I’ll just have to wait and watch it at least once.