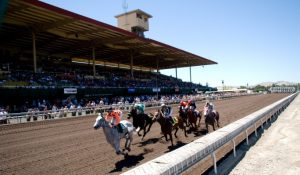 California iPoker could finally move ahead if an agreement to give the state’s horse tracks $50 million a year for staying out of a future online poker market comes to pass. But is that figure really sustainable? (Image: paulickreport.com)

California iPoker’s “most-likely-to-pass” bill appears to have gained an amendment that would give the state’s racetracks a whopping cut of the revenues of a future regulated market.

AB 431, sponsored by Assemblyman Adam Gray (D-21st District) contained very little in the way of language when it was introduced last year. Instead, it was designed to act as a vehicle to advance through the legislative process, while necessary details would be filled in as, when, and if, the state’s bickering stakeholders could find some kind of common ground.

At least one compromise, it seems, has been reached. The racetracks, whose desire to participate in a future market is opposed by at least one coalition of tribal operators, will receive $50 million per year from the online poker industry, as compensation for not being directly involved.

The news was revealed inadvertently in two almost identical letters, sent to Gray by the Morongo and San Manuel Bands of Mission Indians, respectively. Both were voicing concerns about the rapid advancement through the legislature of AB 1437, Gray’s bill to regulate daily fantasy sports.

Many California operators feel that the sudden momentum of the bill has swept aside the ongoing effort for online poker regulation.

“Why are Internet poker operators expected to pay $60,000,000 annually to the Horse Racing Internet Poker Account in the draft amendments to AB 431, yet DFS operators would have no such obligation?” demanded the letters.

Sources later confirmed to Chris Krafcik of Gambling Compliance that the amendments indeed existed and that moreover many in the racing industry were prepared to give up operating rights in return for $50 million a year, which will be sourced taxes and licensing fees.

If this is the case, it represents a breakthrough for the apparently intractable online poker regulation process in California. The coalition loosely known as the Pechanga Coalition, after one of its most vocal members, had been bitterly opposed to racetrack participation.

It also represents an enormous cut of the projected gross gaming revenue of a future regulated online poker market, and one that may be unrealistic and unsustainable. Eilers Research has put the annual revenues of a mature market at $273 million, although others expect it could go higher.

Is DFS a Banked Game?

Unlike the Pechanga, the coalition comprising Morongo and San Manuel has preached a broadly inclusive market. They have to, because they want regulation to pave the way for their future operating partner and so-called “bad actor,” PokerStars.

All that remains now is for the Pechanga and Morongo coalitions to settle their own differences. They may even find a common cause in their mutual disapproval of AB 431.

The letters also queried whether DFS constitutes a “banked game” because the operators “set the [payout] award amount regardless of the number of participants and amounts wagered” and whether this places such operators in violation of the California Penal Code.

Banked games, meaning the casino or online operator has a stake in the outcome, versus poker where the house simply takes a rake, are illegal in California outside of licensed tribal casinos. Permitting them would require an amendment to the state’s constitution.