Jersey City poker player Evan Kochav has been sentenced to eight years in prison for stealing over a half a million dollars from victims he convinced to plow their savings into investments that didn’t exist, in what was essentially a low-level Ponzi scheme. 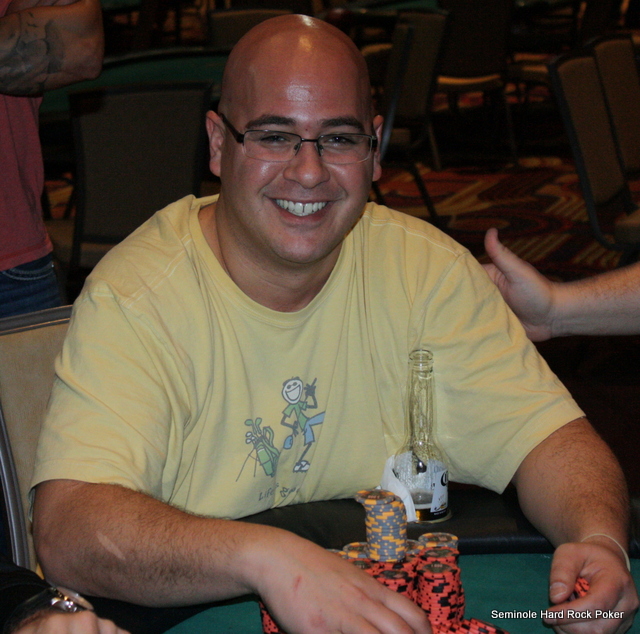 New Jersey poker player Evan Kochav bilked his victims out of more than half a million dollars, which he spent on poker and vacations, as well as making nominal Ponzi scheme payouts to his unsuspecting “investors.” (Image: Seminole Hard Rock Poker)

Kochav, 34, was described by New Jersey’s acting Attorney General Robert Lougy as a professional poker player. But Kochav’s apparent lack of ability to make money from the game, along with his full-time efforts as a bogus investment advisor, would render that description dubious.

The Hendon Mob website reveals Kochav has cashed in just four tournaments in 11 years. Meanwhile, he frittered away stolen funds at casinos in Atlantic City and Pennsylvania, as well as at two poker websites, said Lougy.

Rather than making money through poker, Kochav stole it instead, and from a group of people who had placed him in a position of trust, some of whom were described in court as his friends.

Kochav pleaded guilty in December to theft by deception and money laundering between 2012 and 2014. The court heard that he had promised to invest the funds in businesses and investment vehicles in the fields of real estate, manufacturing, building development, oil drilling, and mineral rights, but used falsified documents to make it appear to clients that he had these connections.

Instead, he laundered at least $274,000 through several bank accounts, paid nominal amounts to his investors, and blew most of the money on poker and vacations.

“Kochav offered a series of lies to steal from investors, promising them big returns and providing them with false account statements and quarterly reports so they believed their money was securely invested,” said Elie Honig of the Division of Criminal Justice. “We will continue to work closely with the Bureau of Securities to protect investors and insure [sic] that crooked brokers like Kochav face justice.”

The court heard that Kochav has been investigated by the New Jersey Bureau of Securities, which removed him as a licensed securities agent in October 2014. The Bureau then assessed a $2 million civil penalty against him and his company, White Cedar Group, LLC.

In 2013, the Financial Industry Regulatory Authority (FINRA) also banned him from associating with its members.

Kochav’s attorney had asked that the sentencing be suspended in order to give his client time to pay some of his victims back in the hope of receiving a lighter sentence, a request that was denied by the judge.

“The sheer magnitude of the loss and harm to the victims is entitled to great weight,” the judge said, in justifying the eight-year prison sentence. Kochav will also have to pay restitution to his victims.