New Jersey Online Poker Revenue Up but Fortunes Still Down 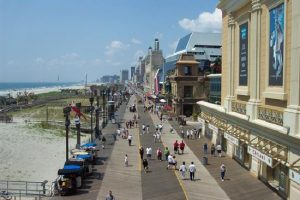 Online poker in New Jersey enjoyed another upswing in July according to the official report released by the state’s Division of Gaming Enforcement.

Despite the summer months traditionally being a slow time for the online poker industry, the Garden State’s trio of platforms appeared to have bloomed in the sunshine.

Following a record low for New Jersey’s online poker industry in June, the Borgata, partypoker, WSOP and 888poker all managed to bounce back in July with a combined $1.89 million haul.

This total represents a 2.7 percent increase on June’s takings; however, it also represents a 12.2 percent decrease compared to July 2014.

As seems to always be the case with New Jersey’s online poker operators, a touch of positive news is often tinged with a hint of negativity.

While the latest set of results ends a three month downswing for the state’s operators, it’s yet another decline for the market as a whole.

As it stands, New Jersey’s online casino sector is thriving with marked improvements year-on-year. In contrast, however, the poker community has seen falling revenues across the board and that’s prompted many to question its viability going forward.

Could Lesniak Hold the Key?

One glimmer of hope on the horizon could be the introduction of PokerStars into the market.

However, despite months of rumors regarding a possible launch date, it seems the operator is no closer to going live than it was in 2014. If Senator Ray Lesniak is to be believed then Governor Chris Christie is the reason for PokerStars’ problems.

Despite meeting all the necessary conditions to obtain a license, Lesniak has repeatedly stated that Christie is working behind the scenes to prevent a deal being done.

Although there is no evidence to suggest this is the case, PokerStars will likely be encouraged by the recent news that Lesniak may be the man to replace Christie in 2017.

If this were to happen and Lesniak was successful in his bid then he would likely make the licensing of PokerStars one of his main priorities.

However, even if the world’s largest online poker operator is given the green light to give live in New Jersey, that may not be enough to reserve the state’s fortunes.

For some, the only viable solution to the decline is playerpool sharing pacts with Nevada, Delaware and any other state that decides to authorize online poker.

Naturally, this network of interconnected states would likely have some tricky logistical issues; however, for many, it’s the only realistic way that US poker games can generate enough liquidity to be attractive for players.

if California online poker bills get introduced and eventually passed, other states will likely follow suit , and a shared player pool might come about .

One state doesn’t have a enough players to make online poker super profitable. The companies that are running the sites undoubtedly know this. This is called “getting in on the ground floor”.