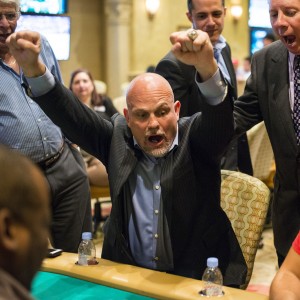 Three-time Stanley Cup winner Daneyko is a natural fit for the company and its ambitions in New Jersey; he’s an avid poker player, who in April won the Borgata Spring Poker Open Deepstack event, as well as a hero to New Jersey sports fans, to whom he is affectionately known as “Mr. Devil,” having represented the New Jersey Devils as a defenseman for a record 1,283 games.

It also strengthens the sponsorship ties partypoker formed with The Devils back in January of this year, when the hockey team, along with the Philadelphia 76ers NBA team, became the first major US sports franchises to form commercial partnerships with an operator from the newly regulated gambling industry. The 76ers and the Devils share the same owners in Josh Harris and David Blitzer.

That deal was typical of bwin.party’s long-running branding strategy of sponsoring popular sports teams in target markets, like its previous deals with Manchester United in the UK and Real Madrid in Spain. Recruiting Daneyko as a spokesperson will help reach out to recreational players in New Jersey, and may also be part of an initiative to ramp up its marketing effort as it braces itself for the imminent entry of PokerStars into the market. New Jersey Senator Raymond Lesniak said recently that this moment was a matter of “weeks rather than months” away.

“I used to get excited at the drop of a puck but now I can’t wait for the turn of the river,” said Daneyko. “Joining Team partypoker with a great champion like Mike Sexton and a great team in Kara, Jamie and Scott makes us the perfect line-up. I love New Jersey, I love poker and there is no better place to play online in the Garden State than on partypoker.com. I can’t wait to play, have fun, win and make new friends online…but mostly win because I love the competition.”

Team partypoker captain Mike Sexton was equally enthused about the deal. “Ken was a fierce competitor on the ice and from what I’ve seen, he’s even fiercer at the poker table,” he said. “He is a great addition to the team and will be a great ambassador for online poker in New Jersey.”

Recent scandals involving high-profile sportsmen like Ray Rice and Adrian Peterson have shown us that the sponsorship of sports stars can be a risky business. Rivals in the US online poker market 888.com’s short-lived and ill-advised deal with Luis Suarez, meanwhile, was a classic example. In Daneyko, however, partypoker looks like they have found themselves a safe pair of hands, and a new team member who, despite being “Mr. Devil,” is unlikely to sink his teeth into anyone in the near future.