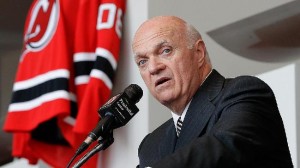 New Jersey Devils general manager Lou Lamoriello: “In my opinion, (Mehta has) already added value in some of the ways he looks at things.” (Image: AP/Julio Cortez)

The New Jersey Devils hockey team has announced the appointment of former professional poker player Sunny Mehta as head of their new analytics department. The appointment represents a growing trend in professional ice hockey as an increasing number of teams turn to the statisticians for help.

Ever since the likes of Bill James and Billy Beane pioneered the use of analytics in baseball to great effect in the early nineties, using what they termed “sabermetrics,” other mainstream sports have attempted to harness the powers of statistics to gain an edge on their opponents. It may have been a slow realization, but it seems that the jocks have finally accepted that, these days, they need the nerds more than ever.

However, unlike some of the more grizzled veterans in professional sport, Devils general manager Lou Lamoriello needed very little convincing. Thanks to his former life as a high school math teacher, he understands the power of numbers. “I certainly was extremely open-minded to it because of my background in math and the way I look at statistics,” he said. “If there is somebody that can look at something a little different and make us better, then that’s the approach you have to take. In my opinion, he’s already added value in some of the ways he looks at things. You can always look at things in a different direction and then you have to make the final decision, but I don’t think you should ever have a closed mind to anything.”

The creation of the new analytics department was recommended by the team’s owners Josh Harris and David Blitzer, who recently saw the benefits that such a system has brought to their NBA team, the Philadelphia 76ers.

Sunny Mehta, who will report to Lamoriello directly, is a native New Jerseyan and a former professional jazz guitarist who, as a high-stakes poker player, was an active member of the TwoPlusTwo forums, and published two books, Professional No-Limit Hold ’em: Volume I (2007) and Small Stakes No-Limit Hold’em (2009), both co-authored with Matt Flynn and Ed Miller. More recently, Mehta has been publishing statistical analysis of hockey games, which has led to his employment by the Devils. Mehta isn’t the first poker player to make a name for himself in sports analytics. Nate Silver, now one of the most famous statistical analysts in the world, once earned his living by playing online poker professionally. Silver went onto develop PECOTA (Player Empirical Comparison and Optimization Test Algorithm), a system for forecasting the performance and career development of Major League baseball players. He gained wider fame by accurately predicting the winner in 49 of the 50 states in the 2008 presidential elections, and, in 2012, all 50. He is now a hugely influential journalist and, in 2010, Forbes Magazine listed him as one of the “most powerful people on the earth.”