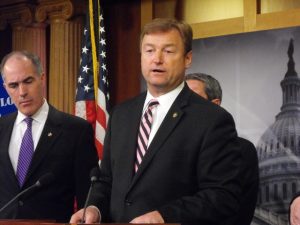 Nevada Senator Dean Heller has been behind some federal anti-online gambling bills, but a new version that allows poker has reportedly been backed by Caesars. (Image: reviewjournal.com)

According to Nevada political analyst Jon Ralston, a new poker-only Internet gaming bill is making the rounds on Capitol Hill. The news is both good and bad for those who support online poker. The good news is that this bill purportedly supports a federal law that would allow online poker to be legalized at the federal level in the United States. The bad news, at least to some, would be that this bill would prohibit other forms of Internet gambling.

Report States Caesars Behind the Bill

Based on a blog post on Ralston’s own website, this is not “a Sands Bill” and that any suggestion attributing this bill to Sands CEO Sheldon Adelson would be “a silly suggestion.” Ralston posted a quote from Andy Abboud who purportedly said, “It is not our bill, nor do we support it.” Abboud is the current vice president at the Las Vegas Sands Corporation.

Ralston states that he has all but confirmed the bill actually originates from Caesars Interactive Entertainment. He notes the bill was handed out by Haley Barbour, a well-known lobbyist for Caesars. The tenets of the bill comply with the initiatives that Caesars wants to see happen in the United States, specifically, poker-only and no “gambling” games online. Barbour served as the governor of Mississippi from 2004 to 2012.

The bill’s purpose is stated as being: “To prohibit Internet gambling in order to protect consumers and the public interest.” The short title of the bill is the, “Internet 6 Gambling Prohibition and Control Act of 2014,” and states that illegal Internet gambling results in “the proliferation of gambling activity, increases in gambling addiction and other socially undesirable behavior.”

Later on, the document refers to the Department of Justice’s memorandum opinion that reversed the position by, “construing the Wire Act to apply only to sports-related gambling activities in interstate and foreign commerce.” It goes on to say, “That opinion has led to the further proliferation of gambling offered by offshore operators, as well as state legislation, some enacted, that permit Internet gambling…”

The rest of the document expresses supposed clarity on the meaning of the Wire Act, the Unlawful Internet Gambling Enforcement Act (UIGEA), and how it pertains to both domestic and foreign availability of internet gambling.

Poker Specifics in the Bill

In the document, it clearly states that the term poker refers to any of several card games, “in which success over the long run is influenced by the skill of the player.” It clarifies that poker is game where players wager against each other and not against the house or operator and the person operating the game may assess a commission fee.

Certain formats of online gambling would be illegal, like sports wagering and casino games. However, an exception for online poker would be made that would be lawful under state and tribal law.

Other exceptions under this proposed bill would include horse racing and lotteries. The document does not address fantasy sports, but one would speculate that it would not apply, given the NFL’s ability to lobby hard for fantasy sports and against real-money wagering on its games online. It is interesting to note that the horse racing and lottery exceptions would immediately impact Delaware, one of the three states that offers such activities.

Nevada Leadership Behind the Bill?

Back in February 2014, United States Dean Heller (R-NV) said that he was working with Senate Majority Leader Harry Reid (D-NV), and aimed to bring a federal bill banning online gaming to Washington D.C. this year. This bill, however, is different from the one introduced by other politicians, because it carves out an exception for online poker, lotteries, and horse racing.

I don’t get who these law makers think they are to say what I can and cant do with my money..there is a casino in probably half the states of the union but we cant gamble online?…horse shit!..this bill is actually good for me cause I don’t sports bet online but would love to play poker but sill I think any bill banning any type of online gaming is stupid..its my money..let me do with it what I please!…I could use it to donate to these corrupt politicians..they have no problem with that…but if I want to have fun with it then that’s a no no!..BS!!!!