The Asian Poker Tour (APT) has signed an exclusive deal with Macau Billionaire Poker (MBP) and the Babylon Casino in an attempt to expand its brand and rejuvenate the region’s poker scene. 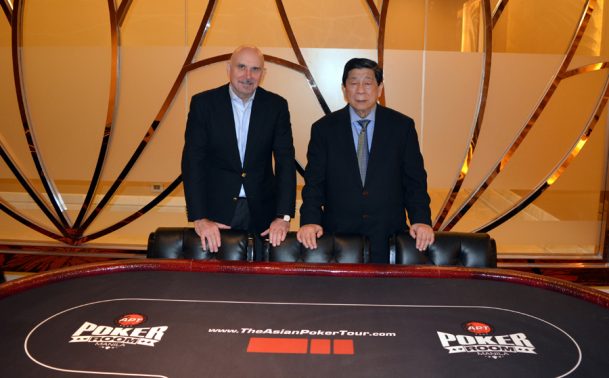 APT CEO Jeff Mann (pictured on the left) is hoping to bring more players and kudos to his tour thanks to a new deal in Macau. (Image: theasianpokertour.com)

According to an official announcement made by the APT on July 30, the APT will be using its new five-year contract with tournament operator MPB to bring two international events to Macau. The first event on the new schedule will be the season-ending PT Finale Championships Macau 2017.

Taking place between November 28 and December 9, the 12-day festival will not only signal the end of the APT season but the start of a relationship all parties hope will bring something new to Macau. Following a crackdown by the Chinese government on various aspects of Macau’s casino economy, gambling revenue across the region has fallen over the last four years.

Citing a crackdown on money laundering as the reason behind its pressure on Macau, the Chinese government has worked to restrict rich players traveling over from the mainland to gamble in the region. In more recent months, the government has also imposed limits on the amount visitors can withdraw from Macau’s ATMs using certain bank accounts.

Commenting on its recent deal, APT CEO Jeff Mann explained that it would not only help the tour grow, but it would reassert Macau’s place as a hub for the poker in Asia and the world.

“The APT now needs a permanent base in Macau; APT needs to be a very active participant in what is the gaming hub of the World. We are delighted with this new partnership with MBP and our joint vision of what is possible for the Macau poker scene moving forward,” said Mann.

Can Macau Regain Its Mystique?

Prior to the slowdown of Macau’s casino economy, it was home to some of the most infamous high stakes cash games in the world. Stories of North American and European pros such as Tom Dwan, Patrik Antonius and Phil Ivey playing for millions were commonplace around 2010.

Although pros such as Dwan are still tussling with rich businessmen in Macau (and coming second in Macau Billionaire Poker tournaments), the scene has certainly lost some of its mystique. With the APT now working to bring more international players to the region, Macau’s cash game scene could once again flourish.

While issues with the Chinese government may still hamper growth, the new APT-MBP-Babylon Casino deal will certainly give players a reason to ante-up in Macau over the next five years.