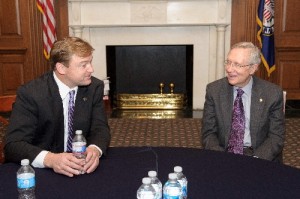 To ban or not to ban Internet gaming: that has been the question in the United States as heavy hitters join the fight on both sides of the debate. The latest log on the fire has been thrown by Nevada Senator Dean Heller (R-Nev), with some purported help from fellow Senator Harry Reid (D-Nev). Both U.S.congressmen say they plan to take steps that will make all Internet gambling illegal in America, with the sole exception of online poker.

The story broke this week after a Las Vegas media interview with Heller about a wide range of topics. Internet gaming was part of the discussion, as Nevada was the first state to legalize, regulate, and launch online poker sites in the U.S. And just two days after the third of those sites – South Point Casino’s RealGaming.com – went online with its soft launch, Heller announced his initiative to outlaw all other types of online gaming.

Heller says he plans to complete the draft of legislation and introduce it to Congress within the next month or so, to stop what he terms the “wild, wild West” of gambling in various states that have already legalized it or are considering doing so.

The bill will aim restore the 1961 Wire Act to its original interpretation before the U.S. Department of Justice released a formal legal opinion in September 2011 that limited the Act’s reach to encompass sports betting only. Heller said the plan is to insert a carve-out for online poker due to its generally accepted classification as a game of skill, whereas other Internet games are ones of chance.

His partner in the effort is Reid, who just recently clarified that his stance on Internet gaming mimics that of Heller. The two have reportedly been working on a draft of the bill to restore the Wire Act and expect it to be finished in the coming months.

“There is no daylight between where Senator Reid and myself are on this particular issue,” said Heller. He added that they are “trying to do what’s best for the state of Nevada.” And they are in the process of recruiting Congressional colleagues on both sides of the political aisle to support  their vision.

Nevada at the Center

Heller has made it clear that Nevada is his primary concern in his efforts to change the law. He claims that the DoJ decision has “huge…long-term implications for a state like Nevada.

“We have 16 states now that are considering online gambling legislation, California being one of them, and my big concern, of course, is what’s going to happen if you can sit in Palm Springs or Southern California or San Diego, Los Angeles, and gamble online and not have to come over here to Las Vegas. Same thing’s true with the Bay Area. If you can do it at home in Sacramento or the Bay Area, why would you come over to Reno?”

The recent ramped-up efforts by Las Vegas Sands Chairman Sheldon Adelson have admittedly affected Heller’s sense of urgency on the matter. Heller admitted to meeting with Adelson and others involved with the Coalition to Stop Internet Gambling and said that Adelson has good points with regard to reasoning for wanting to ban online gambling in the United States.

“To have the wild, wild West as an empire of gambling for the country would have some serious social implications. And I think that’s what he’s concerned with.”

However, many of Heller and Reid’s constituents fall on the opposite side of the spectrum from Adelson. MGM has backed the anti-Adelson effort to stop the potential online gaming ban, and Caesars Entertainment and Station Casinos are just two of the companies with heavy ties to Nevada that favor the legalization and regulation of Internet gambling. It is unclear if either Heller or Reid have met with executives from those companies for their views.

Adelson has made no exclusion to his proposal that includes the regulation of online poker, as Heller wishes to do. But Heller claims that online poker is different. “Games like poker, that I think take a little more skill [than games of chance], if there was a caveat or carve-out for Internet poker, I’d be fine with that.”

If this is what it takes, I can deal with it. However, in that ‘carve out’ I would add Backgammon, and Bridge. Perhaps GO, chess and a few other games of skill.

I have thought for a long time that Slots, and Roulette, and BJ were causing us poker players more harm than good.