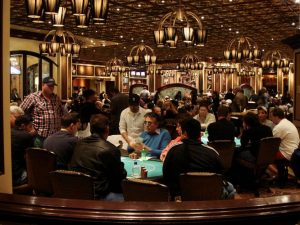 Nevada poker rooms, the combined collection of brick-and-mortar and (more recently) Internet sites, have experienced a decline in revenue for the better part of the past eight years. It appears that 2015 was no different.

The state’s land-based poker rooms and online poker site operators raked in slightly over $118 million last year combined. That’s a 1.57 percent drop from 2014, marking the seventh time in the past eight years the Silver State poker revenues have been on the downfall.

Las Vegas is an iconic gambling destination and plays host to the World Series of Poker annually at the Rio. During the series, attendees can also play online at the WSOP.com site, which hosted its first-ever bracelet event last year. June 2015 reportedly saw the Caesars Interactive-owned site pull in more gross revenues for the month than the entire state had for the year prior.

And many other popular poker tournament series, as well as a wide array of cash games, take place on the Strip at casinos such as Bellagio, Aria, and Sheldon Adelson’s Venetian.

Each year, the peak of poker revenues in Nevada occurs during the World Series of Poker (WSOP). Nearly $16 million was raked in at rooms throughout the state in June and $11,458,000 in July. Just over $10 million was brought in during May. The remaining months are traditionally “down” months for poker.

Chris Moneymaker’s 2003 WSOP Main Event win sparked a massive poker boom. During the following few years, poker was at its peak. The game was regularly shown on mainstream TV networks and poker rooms all across the United States were booming.

Judging by revenue, 2007 was the height of the poker boom in Nevada. The state’s poker rooms generated almost $168 million that year. Since then, poker revenues have been on an annual decline, save for a very slight bump from 2012 to 2013.

Much of the decline can be attributed to the US economy. Supplemental income is needed to gamble for most people, and Nevada, especially Las Vegas, relies heavily on tourism. That mix has created a drop in attendance at Nevada poker rooms.

Black Friday in 2011 also didn’t help matters. Poker all across America, not just in Nevada, saw a big drop in popularity immediately after the US Department of Justice put a cease-and-desist order on all the major Internet poker sites that were operating in the US.

Simultaneously, all US banks were forbidden to interact with payment processors, making even offshore and illegal sites a largely moot point for most American poker aficianodos. Without a way to deposit, and especially to withdraw, funds, online play in the US plummeted until Nevada brought back regulated play in 2013, followed by Delaware and New Jersey.

Poker isn’t the only form of gambling on the decline in Nevada, though. Casino game revenues represented just 43 percent of the money earned by the state’s 271 casinos. That isn’t normal.

In the past, gambling accounted for the majority of casino revenue in the state. But that’s now largely shifted, and hotel rooms, food, and other forms of entertainment are becoming more important to major casino operators such as MGM Resorts, Caesars Entertainment, and Station Casinos in Nevada.

Casinos are adapting by adding new entertainment options away from the casino floor. The poker world is also attempting to adapt by “sportifying” poker, as with the Global Poker League (GPL). Time will tell if events like the GPL, scheduled to kick off this year on Poker Central, will reignite the old fire that once burned in poker players’ bellies and get them back to the felt and online.