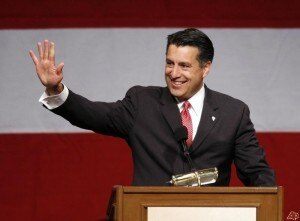 Nevada Governor Brian Sandoval’s “Moment of History” is about to go down, as Nevada prepares to share liquidity with Delaware. (Image: electionsmeter.com)

An online poker compact between Nevada and Delaware that will allow the two states to pool player liquidity is to go live in “four to six weeks,” according to Nevada Governor Brian Sandoval.

Sandoval told Steve Tetreault at the Las Vegas Review Journal that “technical glitches” had prevented the scheme from being rolled out last summer, as was expected, but Nevada regulators now inform him that the launch is “imminent.”

The compact, which Sandoval signed with Delaware Governor Jack Markell almost a year ago to this day, represents the first time ever that a legal framework has been established for fully-legal interstate gambling.

“We are standing in a moment of history today,” said Sandoval at the time. “Nevada first passed gaming in 1931. I consider this a landmark intersection in the road of gaming history.”

The news cannot come soon enough for the two states and their respective online poker markets, both of which have spectacularly failed to achieve pre-regulation projections, due mainly to their relatively small populations.

Delaware, with a population under 1 million, is struggling in particular; in December 2014 it reported a 77 percent year-on-year decrease in revenues, a yield of just $28,589. That made December the lowest of 13 underwhelming months since the state began its online poker operations. In fact, overall, cash game revenues have consistently been the lowest of any state or nationally-regulated market anywhere in the world.

While pooling with Delaware may not make an immediate effect on the Nevada online poker market, the effect in Delaware should be instantaneous; its three racetrack operators will immediately have the ability to offer bigger tournaments with bigger prize pools and a wider range of cash games. All three operators use the 888 platform, which, in Nevada, also provides the platform for market-leader WSOP.com.

Beyond that, Nevada and Delaware have made it clear that the compact is open to other states. As Markell said last year, “Today this is an Internet poker agreement between Delaware and Nevada. But we know more games and more states mean more players, which means more revenue for participating states.”

While regulators in New Jersey say they have looked at the possibility of liquidity-sharing with Nevada and Delaware, no deal has yet been agreed, but it’s probably only a matter of time.

There, 888 has created an intrastate pool-sharing platform for between WSOP.com and 888poker, a move that allowed the new network to topple party-Borgata from the top of the pile. It’s likely that 888 is simply waiting for the green light from the regulator before it expands the network interstate, and possibly, eventually, internationally.

Meanwhile, as lawmakers in California decide whether to legalize online poker, and if they do, whether to permit interstate pool-sharing, it’s clear there’s potential to create a healthy online poker ecology in the US for the first time since Black Friday.