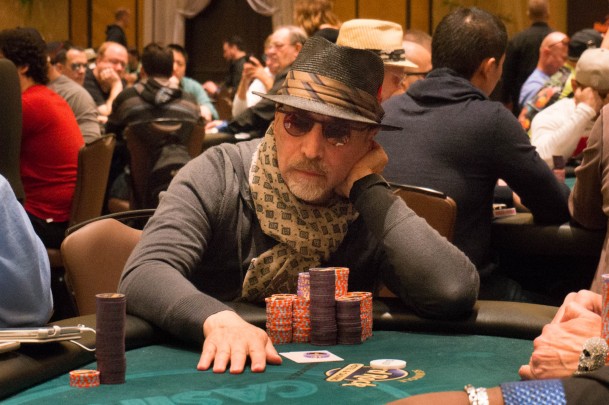 61-year-old Neil Blumenfield (seen here at another poker tournament) has a big stack, and experience to back it up, as he heads into the 2015 WSOP Main Event final table as one of the November Nine. (Image: seminolehardrockpokeropen.com)

Neil Blumenfield has shown the poker world that age isn’t always a factor. At 61 years old, the San Franciscan went on an impressive run at the 2015 WSOP Main Event. A run that gave him over a million dollars already, and could lead to much, much more.

The Silicon Valley executive did something millions of poker players around the world could only dream of: make it to the Main Event final table. Play will resume on November 8 at the Rio in Las Vegas, and Blumenfield could even be a favorite.

Blumenfield wasn’t a known player around the poker community prior to the 2015 Main Event, but he has now earned the respect of his peers, and deservedly so.

The former cloud-based service executive spent a great deal of time at the ESPN featured table during the Main Event, drawing tables that included the likes of Phil Hellmuth and Daniel Negreanu. ESPN has shown many hands involving Blumenfield. He presented himself in a professional manner and proved he has game.

When a 61-year old makes the WSOP Main Event final table, it’s almost a given he has everyone else covered by at least 20 years. That isn’t the case this year, though.

Blumenfield isn’t this year’s most senior player at the table. That title goes to Pierre Neuville of Belgium. Neuville is 72 years old and, strangely enough, has an almost identical stack to Blumenfield (21,075,000).

The third-oldest player at the table is 36-year old Zvi Stern, which any mathematician will tell you is exactly half the age of Neuville.

Age may or may not be a factor in the outcome of this event. After seven grueling days of play, it’s possible that Blumenfield and Neuville would have struggled to remain focused for another few long days at the poker table if not for the fairly new November Nine concept.

Fortunately for these players, they got four months to rest up and prepare. Chip leader Joe McKeehen is just 24 years old, and most of the players at the final table are in their 20’s. The eventual champion will need to withstand three more consecutive pressure-packed days of poker. It will be interesting to see how this impacts the older guys at the table.

After watching Neil Blumenfield compete during ESPN’s television broadcast of the Main Event, he appears to be quite a colorful character, and a respectable man.

Blumenfield has impressed with his poker etiquette and skills. Despite never having previously won more than $38,000 in a live poker tournament, he acts like he’s been there before.

Wearing a rakish-style Indiana Jones hat and matching outfit, Blumenfield has become a recognizable figure during ESPN’s television coverage. Expect to see plenty of friendly banter from Blumenfield at the final table, and solid play. And with a little bit of luck, a win for himself and the AARP community to boot.