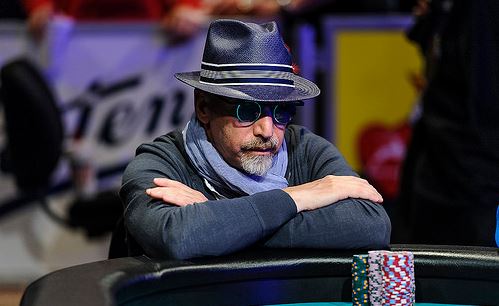 Neil Blumenfield brings the perspective of age and a great sense of humor to the WSOP 2015 November Nine. In our exclusive interview, we find out what he’s thinking as the biggest tournament playdown of his life approaches. (Image: pokerlistings.es)

With the November Nine deep in prep mode for Sunday’s Main Event playdown, we were lucky enough to catch up with Blumenfield (now an 888poker-sponsored player) and speak to him one-on-one.

We asked him about his sartorial splendor at the tables, how age factors into it all, and what ESPN’s TV coverage has been like for him. The answers were unexpected, amusing, and thought-provoking.

But don’t take our word for it, read for yourselves.

CC: You’ve been an entertaining, colorful character on ESPN’s telecast of the Main Event so far. We get the impression this whole journey was the experience of a lifetime to you. Have you enjoyed the TV coverage of your play? What have some of the highs and lows of the tournament been so far for you?

NB: Its great that people think [that], and appreciate that I bring a little “style” to the game. That certainly sits well with my girlfriend, Pascale, who owns a fashion boutique, Pascaline Paris, in San Francisco. And I do enjoy being a little different both in look and in manner at the table.

I think that poker is a very social game. Many of my friends are people I met playing poker. So I enjoy the banter at the table. We’ll see how “loose” I am on Sunday.

As for the coverage of me, the most enjoyable parts for me are the times when I wasn’t playing a hand. I played a number of the hands they showed badly (notably QT vs Hastings, AA vs Hinds, KK vs Jarvis, 9T vs Cannuli and JJ vs Daniel). So it’s a little tough when my blunders are broadcast and then discussed in the forums, etc. Hope to provide less fodder the next three days of play.

Highs of the tournament [for me]:

1. Making Day 5. This was my goal coming in, improving on my previous best, so that was big.
2. Hitting the runner-runner straight vs Brian Hastings on Day 6 to stay alive.
3. The 15 minute run of cards (KK, TT, 33, KK, AA in 6 hands) on day 7 to double twice and get in position to make a run at the final table.
4. Turning a flush against Zvi with 12-14 left to move into top 4 in chips.
5. Alex busting to seal November Nine.

1. Losing with KK to Matt Jarvis’ set of 6s late day 5 which put me at the bottom going into day 6. Late day 5 was the only time that I think that exhaustion led to bad decisions. (The rest were just because of stupidity…)
2. Losing with set of A’s to John Hinds rivered flush.
3. Needing runner-runner straight (I also had 2 overs) to survive vs Hastings.

Who Scares Ya, Baby?

CC: You sat at a featured table with the great Daniel Negreanu. What was it like playing with one of the best that has ever lived? Was it intimidating in any way?

NB: Not really intimidating, but also not very profitable. Daniel pretty much owned me. He out-drew me and/or out-played me in like 5 of the 6 hands we played. But it is fun to play with a guy who is so animated and obviously loves the game, and loves playing the game. It’s a shame he didn’t make it to the final table. However, I wouldn’t offer him my seat…

CC: You’re the second-oldest player among the November Nine, with only 72-year-old Pierre Neuville passing you in the life accumulation mode.

After seven grueling days of play back in July, were you glad to have a few months off prior to the final table, or would you have preferred to just get it over with back in July? What’s your strategy going to be to stay rested and focused when playing against a few younger guns, and one cagey and experienced older one?

NB: First, the more I read and listen to Pierre, the more I respect and like the guy. He has such a great attitude and approach to life. And I think it is great for the game and great for my generation of players that Pierre and I are both here.

For me, the time off was huge, a little because getting a break after seven 13-hour days was good, but more so because it gave me a chance to work on my game. I think I am a much better player today than I was in July.

I actually felt ready to go for the first time a week ago. Now I am chomping at the bit. No specific strategy to stay focused. Should not be a problem as long as I slow down and take my time for every decision. If I analyze the spot, I am very confident I can make the best decision.

CC: Do you think this could be the year the Main Event age barrier finally gets broken?

NB: It was broken when a 94-year-old guy, William Wachter, cashed. Pierre and I continue that trend as we are the two oldest to make the final table in the November Nine format. I think that both Pierre and I have a good chance to compete to win.

The fairy tale end, and maybe the best end for the game, is for Pierre and me to go heads up for the bracelet. Of course, with the young kid taking it down.

I’m near SF and will definitely be rooting for Neil.