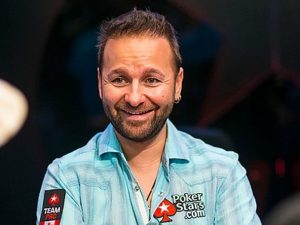 Daniel Negreanu is to play a role in a new poker-themed TV show, Four Kings, it was revealed this week.

Written and directed by Mars Callaghan, who scripted, directed and starred in pool-hustler flop Poolhall Junkies, Four Kings follows the fortunes of four best friends who live in the penthouse of the Cosmopolitan in Las Vegas.

According to IMDB, three of the group are world class poker players and the fourth is a bookie who “makes the line the line on absolutely everything.”

“Together they travel the world in search of the highest stakes games with the most colorful of characters,” it states. “With a loyalty and integrity level that is rarely seen, these four best friends stick together and watch each other’s backs through everything that comes their way in their search for becoming world champions.”

“I would describe it as Swingers meets Entourage meets gambling and poker,” Negreanu told PokerListings. “What I’ve liked about the script so far is that it’s not about poker. That’s what they do, they play poker for a living; but it’s not about the game, it’s about the lifestyle.

“I think it has the opportunity to be mainstream, which is most important,” he continued. “If it’s just a show that poker players are gonna watch, then it’s not going to last. But this is something I think everyday people who don’t play poker may watch and actually become more intrigued by the game.

“Some of the poker players may look at some lines and say ‘Oh, that’s cheesy,’ but it’s not for you, it’s for the mainstream audience … “I think it’s going to help poker look cool again. Kinda like a reboot of Rounders, where Rounders really helped put poker on the map.”

Negreanu’s right about Rounders and the procession of turkeys that has marched across our screens since Mike McDermott battled over the baize with a sinister Oreo-munching Russian. In terms of TV dramas, we had TILT, way back in 2005 (remember that?).

Written by the Rounders team, Brian Koppleman and David Levien, and starring Michael Madsen as Don “The Matador” Everest, this one should have been good, but it turned out to be about poker cheats and violent criminals, which was not the image of poker we were all working hard to promote at the time.

The Rounders team had blotted their copy book, and Negreanu was in fact among its most vocal critics.

For Four Kings, meanwhile, he has high hopes.

It’s likely to debut sometime next year, he says. Watch this space…

Wow cool he is one of my favorite Poker Players I can’t wait to see his new show.

Hopefully in his next gig he’ll play Phil Hellmuth!