The Team PokerStars pro was so close to winning this bracelet he could smell it. But he couldn’t quite grab it. Negreanu finished in 6th place ($61,667), after making his third final table appearance at the 2017 WSOP without a win. 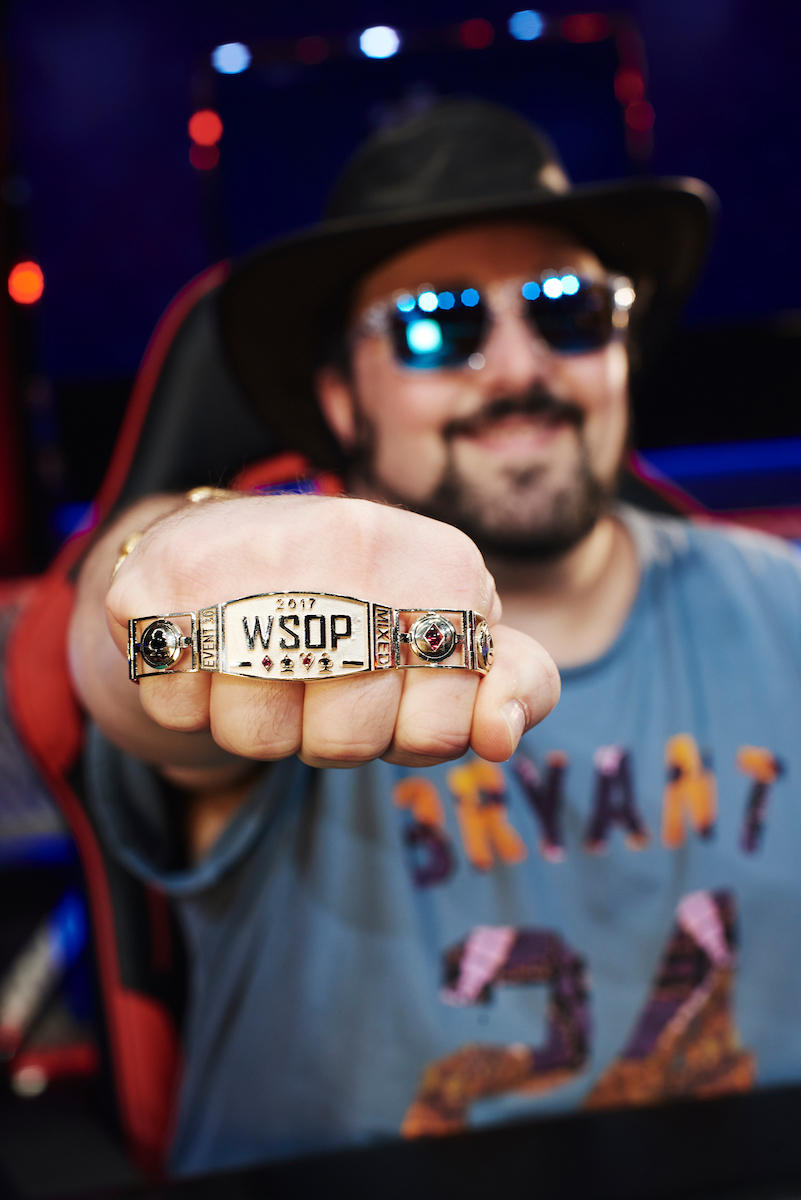 With his victory in $10k HORSE, David Bach became the first player of the 2017 WSOP to win multiple bracelets. Yet he’s still only 14th on the Player of the Year leaderboard. (Image: Antonio Abrego / PokerPhotoArchive.com)

Negreanu has still been one of the WSOP’s top performers this summer. But he set out to win three bracelets, a goal he would probably admit in private that as the WSOP nears its halfway point is about as likely as the proud liberal voting for Donald Trump in 2020.

He even placed side bets to back up his pre-WSOP bracelet bravado.

We do have some good news for the world’s all-time winningest live tournament player, however. His recent cash, the 98th WSOP payday of his career, moved him up to 3rd on the WSOP Player of the Year leaderboard. With 379.25 points, Negreanu trails only Pablo Mariz (459.41) and James Obst (415.77).

Negreanu held the chip lead at the start of Day Three and still had a big stack when the final table began. But the cards simply didn’t cooperate. His stack dwindled quickly, into something that he could only nurse for so long.

The day instead belonged to David Bach, a former professional bowler, who at one point at the final table was down to just a few big bets. But Bach was able to rebuild his tiny stack, winning the tournament and $383,208 for his 31st career WSOP cash, and his third bracelet.

The win also put Bach in a positing that perhaps Negreanu imagined himself in, becoming the first two-bracelet winner of the 2017 summer. Bach also won Event #11, the $1,500 Dealers Choice 6-Handed.

POY Point System Out of Whack?

Many poker pros, especially high-stakes players, aren’t particularly happy with the new Player of the Year scoring system. This year, it is based on a formula that rewards Return on Investment (ROI), giving the most points to players who make deep runs in large-field events.

In most cases, the higher the buy-in the fewer the entries, with the possible exception of the Main Event. So the new system doesn’t reward players chasing POY dreams by cashing in $10,000 “Championship” events as much as it did in the past.

Take Bach, for example. He’s the lone multiple bracelet winner so far for 2017. But he’s only 14th on the current POY standings, having bested two fields that had only 514 entries combined.

Current point leader Pablo Mariz, by comparison, won the Millionaire Maker, a tournament with 7,761 starting stacks, and finished runner-up in the $1,000 Tag Team, an event that drew 843 entries.

Barry Greenstein, by contrast, is benefiting from the funky new scoring system. He has cashed in an impressive six tournaments this summer, but for less than $40,000 in winnings, which might not even have him breaking even on buy-ins. Yet, the 2011 Poker Hall of Fame inductee is in 8th place on the POY leaderboard.

Play was stopped after 1 am PT on Sunday morning in Event #29, $2,500 No-Limit Hold’em, with two players remaining. James Calvo and Gaurav Raina will come back today at 1 pm to determine a champion.

Calvo, from the Chicago area, has more than a two-to-one chip advantage (9.6 million to 4.0 million) over the Georgia resident. Neither player has ever won a WSOP bracelet. This one is worth $456,822.

“Soda Thief” to Get What’s Coming

Crime of the century alert! Allen Kessler finished Day Two in Event #32, $1,500 Omaha HI-Lo 8 or Better Mix, in 21st position out of 29 remaining players. “The Chainsaw” was presumably happy to advance to Day Three on Sunday, but disappointed with his below-average stack and an uphill battle to climb.

Todd Brunson believes he knows why Kessler’s stack is so small. The Poker Hall of Famer and new restaurant owner says karma is in play, noting that Kessler had visited Brunson’s Roma Deli a few days ago and walked out without paying for a soda.

The alleged “soda thief” is chasing chip leader Howard Smith for a 1st place prize of $193,484. No matter what happens karmicallly, Kessler’s guaranteed a Sunday min-cash of $4,742, so perhaps he’ll pay Brunson the $2.95 he still owes for his drink.

The tournament began with 5,389 seniors chasing a $617,303 payday. That includes a long list of old-school players. Greg Raymer, 2004 Main Event champion, had a big stack heading into Day Two but was eliminated in 192nd place.

What a day for nine-time WSOP Circuit ring winner Valentin Vornicu. The California native bagged the largest stack after Day One in Event #33, $1,500 No-Limit Hold’em. He’ll come back for Day Two on Sunday with 198,000 chips.

It was his second big mid-tourney score of the day. Earlier on Saturday, he bagged the chip lead in the Day 1B flight of The Giant, a $365 buy-in event with Day One starting flights each Friday until July 7. We can’t promise this isn’t “fake news,” but Vornicu is probably the first player to finish the day with a chip lead twice in 24 hours in two separate events.

Sunday Stroll at the WSOP

In Event #34, $10,000 Limit 2-7 Lowball Triple Draw Championship, Adam Owen will come back on Sunday with the chip lead and 26 of the 80 original entrants remaining with two days of play left.

The “Super Seniors” event is open to players 65 and older, whereas the Seniors championship lets in any young whippersnapper who’s turned 50.

Poor Daniel. I think he’s putting a lot of unnecessary stress on himself to win. I think telling himself that he “must” get a bracelet is throwing him of his game. Perhaps he should just relax and have fun and let the poker gods worry about the rest.